The India vs Pakistan on June 16 in Manchester, which is expected to be a full-house. 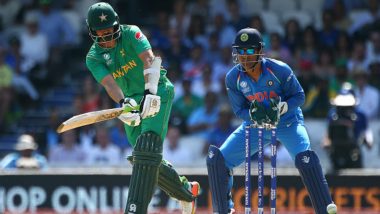 Rivals India and Pakistan do not play each other in bilateral series (Photo: Getty Images)

Amidst escalating tensions between neighbours India and Pakistan, cricket has become a causality as well. Rivals India and Pakistan do not play each other in bilateral series and face-off only in multinational tournaments like Asia Cup and ICC events. Later this year in September, the traditional rivals will be up against each other in the Asia Cup 2018. And then next year, the two teams will fight it out in the ICC Cricket World Cup 2019, which will be held in the UK from May 30 to July 14. ICC Cricket World Cup 2019 Schedule: India to Open Their Campaign Against South Africa

India, the two-time World Cup winners, will open their campaign against South Africa on June 05 and will face rivals Pakistan on June 16 in Manchester, which is expected to be a full-house. ICC cashes in on India vs Pakistan rivalry at its events and the contests are almost always a sell-out.

The two sides met twice in the ICC Champions Trophy in England last year and apparently fans thronged the venues in both the matches. In the last edition of World Cup in 2015, India opened their campaign against Pakistan. However, in the upcoming edition, the two teams will not meet each other at the start of the tournament. Interestingly, India have never lost any of the four World Cup matches against Pakistan.

Initially, India were scheduled to face South Africa on June 02, but the fixture was altered following BCCI’s request to maintain a mandatory 15-day gap between IPL and international match as per the Lodha Committee recommendations. The IPL 2019 take place between March 29 and May 19.

(The above story first appeared on LatestLY on Apr 24, 2018 08:33 PM IST. For more news and updates on politics, world, sports, entertainment and lifestyle, log on to our website latestly.com).