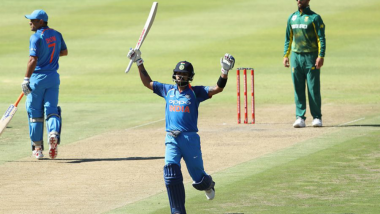 Kolkata, Apr 24 (PTI) India will open their 2019 World Cup campaign against South Africa on June 4 instead of June 2 as the BCCI will have to maintain a mandatory 15-day gap between IPL final and international assignment as per the Lodha Committee recommendation. The 2019 World Cup will be held in the UK from May 30 to July 14.The matter was discussed during the ICC Chief Executives Meeting here today.

"The 2019 IPL will be played between March 29 and May 19. But we need to maintain a 15-day gap and World Cup starts on May 30. Therefore as per 15 day gap we could have only played on June 4. Earlier, we were scheduled to start on June 2 but we couldn't have played on that day," a senior BCCI official present here told PTI on conditions of anonymity.

"South Africa are our first opponents. The CEC agreed and the matter has been referred to the ICC board," he further added.

Interestingly, ICC in their various marquee events have always started with an Indo-Pak fixture which is a sure-shot sell-out. It happened in the 2015 World Cup in Australia (at Adelaide) and 2017 Champions Trophy in UK (in Birmingham).

"This is the first time Indo-Pak match won't be a starting affair. Since the format will be a round robin affair (all teams playing each other like 1992)," the official added.

Among the other decisions that were formalised included the FTP for the next five year cycle from 2019-23.

"As we had decided, India will play a maximum 309 days of international cricket in this cycle across formats, a reduction of 92 days from the earlier cycle.

"However the number of home Test matches will increase from 15 to 19. All these Tests will be part of the World Test Championship," he added.

It was also confirmed that India will not play any Day/Night Test match for now as it's not a part of World Test Championship.