The 29-member broadcast group were given clearances from the Pakistani authorities to go through the Wagah border instead of taking a divert flight to Dubai. But were stopped at the Attari check-post by the Indian immigration officers, who asked them to return to Pakistan and come back to India by flight as their visas only permit travel by air and not by foot. 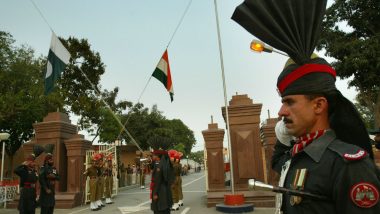 A group of Indian broadcasters were left stranded in Pakistan after being denied entry to the country by immigration officials. The group of 29, all of whom hail from India, were part of the broadcast team covering the Pakistan Super League (PSL) 2020 but the abrupt suspension of PSL 2020 in the wake of the global coronavirus outbreak coupled with the travel restrictions of several countries, including India, has left them short of options. The knockout stages of PSL 2020 was suspended after Alex Hales reportedly showed symptoms of the disease. The event has since been postponed until further notice. Shahid Afridi on Postponing PSL 2020, ‘The Decision Should have Been Made Earlier’.

According to a report from the Dawn, the group had initially travelled to Pakistan via Dubai through flight. But after the suspension of the PSL and the growing number of coronavirus confirmed cases in Pakistan, the group had to leave for India at the earliest.

Wife of a Stranded Crew Member Requests for Help

29 Indians stuck at Wagah border in Pakistan. Wife of one of them appeals for help to facilitate their entry back into India. #Pakistan #IndiaFightsCorona pic.twitter.com/RFCQitLOxZ

In a bid to expedite their return, the broadcast group were also given clearances from the Pakistani authorities to go through the Wagah border instead of taking a divert flight to Dubai. But the 29 Indian crew members were stopped at the Attari check-post by the Indian immigration officers, who asked them to return to Pakistan and come back to India by flight as their visas only permit travel by air and not by foot.

“The Indian officials will come back to Pakistan on Thursday as they have multiple visas and then their air travelling plan would be chalked out again for them to go back to their country,” a spokesperson of the Pakistan Cricket Board (PCB) told the Pakistan national daily. He also informed that the Pakistan immigration authorities had relaxed the visa issue due to the rising emergency but the crew were turned back by the Indian officers at the Attari border check-post leaving them stranded.

Pakistan has also instructed for all individuals travelling from other countries to go into self-isolation from March 18 and it remains to be seen whether the stranded 29-member Indian broadcast crew will have to do the same. The group will, however, have to undergo tests for coronavirus which could determine the outcome of their travel plans.

Earlier, the PCB had conducted coronavirus tests for 128 members, both players and staff of all franchise teams, involved in the PSL and the results showed all were negative. Meanwhile, the foreign players have all, barring Moeen Ali, have returned back to their respective homes and will not travel back for the PSL until further notice. Moeen Ali is scheduled to travel on Monday.

(The above story first appeared on LatestLY on Mar 20, 2020 01:04 PM IST. For more news and updates on politics, world, sports, entertainment and lifestyle, log on to our website latestly.com).