Shahid Afridi on Postponing PSL 2020, ‘The Decision Should have Been Made Earlier’ 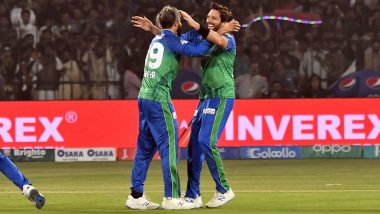 After Alex Hales having the symptoms of coronavirus, the PSL 200 semi-final and final match were postponed by the Pakistan Cricket Board. Chris Lynn who was playing for Lahore Qalandars had already decided to go back home and in the wake of Hales having the symptoms of the deadly disease, the PCB announcement about postponing the tournament. Now, Shahid Afridi who also represents who plays for Multan Sultan said that the decision should have been made earlier. The Pakistani all-rounder also said that he was sad with the way the PSL 2020 was coming to an end. PSL 2020 Semi-Finals and Final Postponed Amid Coronavirus Outbreak in Pakistan, PCB to Announce Rescheduled Dates Later.

In his tweet, the former Pakistani captain also mentioned that the safety of the players was of the utmost priority. Shahid Afridi ended the post on a hilarious note and said that the PSL 2020 trophy should be handed to the table toppers. Multan Sultan tops the table with 14 points in their kitty. The team had played 10 games and won six and lost a couple of them. Two of them produced no result. Check out Shahid Afridi’s tweet below:

Sad to see the PSL end, but health and safety of all concerned is the key, esp those who are travelling back to their homes.Perhaps the decision could have been taken earlier, with regards to the trophy...well the table-topper should be handed the trophy? 😊 @MultanSultans

Earlier it was the Pakistani Cricket Board who took to social media and announced about the postponing the league. Multan Sultans, Karachi Kings, Lahore Qalandars and Peshawar Zalmi were the four teams who made it to the second round. The first semi-final was scheduled between Multan and Peshawar and the second between Karachi and Lahore.

(The above story first appeared on LatestLY on Mar 17, 2020 06:31 PM IST. For more news and updates on politics, world, sports, entertainment and lifestyle, log on to our website latestly.com).