Amit Mishra, who played four games for DC, sustained a finger injury while fielding during the clash against Kolkata Knight Riders which eventually brought curtains to his campaign. Before bidding adieu to his teammates, the 37-year-old delivered a heartfelt speech in the Dubai hotel room. 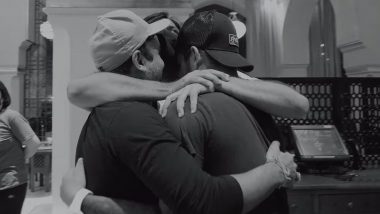 Veteran leg-spinner Amit Mishra bid an emotional farewell to Delhi Capitals camp after getting ruled out of Indian Premier League (IPL) 2020. The seasoned bowler, who played four games for DC, sustained a finger injury while fielding during the clash against Kolkata Knight Riders which eventually brought curtains to his campaign. Before bidding adieu to his teammates, the 37-year-old delivered a heartfelt speech in the Dubai hotel room.  DC shared Mishra’s emotional video on their YouTube page, which also featured Shreyas Iyer and Shikhar Dhawan. Delhi Capitals' Spinner Amit Mishra Ruled Out of Dream11 IPL 2020 Due to Finger Injury.

“On behalf to the whole team I would like to thank you for your service in the last five games. You were amazing in your efforts throughout those days. We would be missing you definitely but going forward, I would just like to say that please do keep in touch. We will also try to do that,” DC skipper Shreyas Iyer was seen speaking in the video. Head coach Ricky Ponting, Shikhar Dhawan and Ishant Sharma were also seen hugging and congratulating the veteran spinner. Why is Delhi Capitals Wearing New Jersey During RCB vs DC IPL 2020 Match?

With 160 wickets, Mishra is the second-highest wicket-taker in IPL history and had shone good form in the ongoing competition too. However, his journey came to a rather unfortunate end. Nevertheless, the leggie was pleased with the fact that it was his effort which resulted in his ouster rather than any fitness issue.

“The fact that I got injured while playing - trying to catch the ball - giving my 100 percent is a bit satisfying. It is not an injury related to fitness which means I am doing fine,” said Mishra.

Meanwhile, Delhi have made a staggering start to IPL 2020, winning four out of their first five games. Though Mishra was a big part of DC’s spin attack, Axar Patel and Ravi Ashwin have been in good form, and the duo will not want to make Delhi Capitals feel the leg-spinner’s absence.

(The above story first appeared on LatestLY on Oct 07, 2020 08:09 PM IST. For more news and updates on politics, world, sports, entertainment and lifestyle, log on to our website latestly.com).