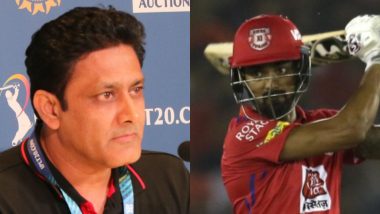 With Indian Premier League (IPL) 2020 all set to take place from September 19 onwards in the United Arab Emirates (UAE) franchises have started to focus on the upcoming season. IPL 2020 was initially scheduled to be held in March but was postponed due to coronavirus pandemic. BCCI is yet to release the official schedule of IPL 2020, but things have started to gain momentum ever since Brijesh Patel, league chairman, confirmed the start date of the T20 tournament. Meanwhile, Kings XI Punjab (KXIP) co-owner Ness Wadia is looking forward to IPL 2020 as the Mohali-based franchise will be captained by KL Rahul for the first time. IPL 2020: Andre Russell is Michael Jordan of T20 Cricket, Says KKR CEO Venky Mysore.

Wadia, when asked about whether the appointment of Anil Kumble as Director Of Cricket Operations or head coach and Rahul as a captain was a conscious decision to bring a change of luck, told Gulf News that it possibly was. "You can possibly say that. The wealth of experience and cricketing knowledge that Anil brings about should work well with Rahul, who has proved to be a phenomenally versatile player. We certainly hope to do well this time," he said. IPL 2020: Andre Russell, Kamlesh Nagarkoti Hit Nets As Kolkata Knight Riders Get Ready for T20 League’s Upcoming Season in UAE (Watch Video).

Wadia also expressed his views about whether fans should be allowed inside the stadiums during IPL 2020 or not. The KXIP co-owner said, "the decision finally rests with the UAE government and the safety protocols there. I am told they have very sophisticated testing machinery there and even if they can look at a smaller percentage of fans as the NBA are doing it, it will be good. However, all of us want an uninterrupted IPL first and I will be inclined to be more on the side of caution."

(The above story first appeared on LatestLY on Jul 28, 2020 11:58 PM IST. For more news and updates on politics, world, sports, entertainment and lifestyle, log on to our website latestly.com).