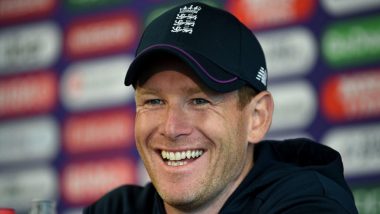 London, July 30: England white-ball skipper Eoin Morgan has highlighted the importance of overseas players playing in the Indian Premier League (IPL) as according to him, it helps cricketers deal with pressure of playing on the big stage.

Following initial hesitation, England cricketers have been a constant feature in the cash-rich league as the likes of Ben Stokes, Jofra Archer and Morgan himself have been participating in the league for quite sometime now.

Morgan, who was bought for Rs. 5.25 crore by Kolkata Knight Riders in the auction held last year, revealed his conversation with team director Andrew Strauss which paved way for Englishmen to ply their trade in India's premier domestic T20 competition on a regular basis. IPL 2020 Final News Update: Indian Premier League 13 Final Likely to Be Postponed From November 8 to 10 to Optimise Diwali Week.

"I pushed him (Strauss)...not that he needed a lot of pushing...but I pushed him to make that call because international 50-over bilateral series...it's so difficult to replicate that pressure that comes with it," Morgan told cricbuzz in a video uploaded on their YouTube channel.

"He asked me 'what's different' and I said one you are playing as an overseas player, so there is huge amount of expectations. You are playing for less number of spots in the XI.

"Two, if you play in India in the IPL, there is a different level of pressure. Sometimes you can't get away from it. It takes you out of your comfort zone. I said that's good for any player," he added.

The 2019 World Cup-winning captain also stated that they are using IPL to help their cricketers hone their skills and also deal with high-pressure situations which ultimately results in making them better at what they do.

"Strauss agreed with me. He thought making guys available has resulted in guys going there and performing well. That was a big mindset shift for us," Morgan said.

"And I hope Indian cricket is alright with us because we are using IPL as a vehicle to try and grow players," he added.

(The above story first appeared on LatestLY on Jul 30, 2020 03:57 PM IST. For more news and updates on politics, world, sports, entertainment and lifestyle, log on to our website latestly.com).