KL Rahul has undoubtedly been one of the standout performers for Punjab Kings this and last season also but what is worrying is that although he has done his job alright, the franchise seems to be somewhat over-dependent on him to deliver at all times. He has obliged sometimes and on certain occasions when he has failed, his team too suffered the same fate. 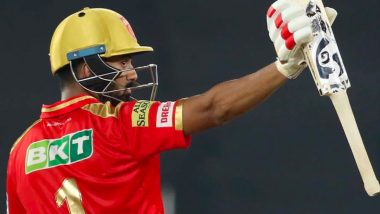 KL Rahul celebrating one of his fifties for Punjab Kings this season (Photo credit: Twitter)

KL Rahul has been one of the best players in the Indian Premier League 2021. With the ability to play shots all around the park, score runs at will and change gears whenever necessary, he has undoubtedly been one of the best batsmen in the competition. No wonder why he is the among the contenders to win the Orange Cap having scored over 500 runs from 13 matches. For the record, he had won the Orange Cap in last year's IPL as well where he amassed a mammoth 670 runs from the 14 league games. Just goes to show how important and impactful batsman the Karnataka and India right-hander is. But what currently underlines his success in the Indian Premier League is not his statistics with the willow but the performance of his side, Punjab Kings. The franchise from Punjab have been perennial underachievers in the competition, having reached the final only once (in 2014, where they lost to Gautam Gambhir's Kolkata Knight Riders) and have struggled every season now, despite showing a lot of promise at the beginning. RCB vs PBKS IPL 2021 Stat Highlights: Royal Challengers Bangalore Qualify for Playoffs

A change of nomenclature did not help as they still fail at seizing the crucial junctures in a match and fall short of victories.  No, it is not Rahul's fault. That lad has possibly done all he could to bail out his team-scoring runs consistently, promoting young players and even making good and solid choices as captain of the franchise. Still, they always seem to lose their way midway into every IPL season and end up falling short of making it through to the playoffs, or even the title. At times like these, one can simply sit back and wonder, "Is KL Rahul too good for Punjab Kings?", or "Would KL Rahul win the IPL had he played for any other franchise?".

Statistically, Rahul has been too good for his franchise. As a batsman, he averages 52.80 this season, has the highest score of 91* and has cleared the fence a total of 22 times--all of which is the best in his team and also better than some top names like Virat Kohli and Rohit Sharma. Yet, quite ironically, fans would not get to see much of him this season anymore after Punjab Kings experienced a familiar batting collapse against Royal Challengers Bangalore on Sunday, October 3, which severely dented their playoff hopes. What is startling is that they were actually looking set to win when Rahul was batting alongside his reliable opening partner Mayank Agarwal. Virat Kohli's started to believe they could win and eventually did, the moment Rahul was dismissed. And that has been Punjab's tale this season.

Or it is the captain's hat that is weighing him down, preventing him from playing the way he does for the national side? Whenever a wicket falls, Rahul might be struck with the idea that there is not a potential match-winner down the order who can bring the side two points and hence, he takes up the role of the central player.

Let me talk about another match to show how important Rahul's contributions matter to Punjab, Against Kolkata Knight Riders, the 29-year old stayed throughout his side's run-chase and after surviving some close chances, he was dismissed but the match had already been won by then. Yet, when he falls early, Punjab seem to lose their way completely.

Even last season, he took up the mantle of the side and led from the front with the willow, scoring a whopping 670 runs. But Punjab finished sixth, winning just 12 points in 14 matches. One can infer that their situation would have been much worse had Rahul not been there. Well, the reality is that he is indeed, too good for a side that depends on him to deliver the goods, score runs, lead brilliantly and also potentially get them to the title. Cricket's a team game right? Although individual performances are important, it is a team effort that makes the difference at the end and sadly, Punjab Kings would continue to languish in the bottom half of the table if they remain overtly dependent on Rahul, all the time.

Having said that, Punjab Kings can still, somehow turn the tide and make a difference this season. First, by qualifying for the playoffs (which looks extremely difficult and unlikely at the moment) and secondly, by potentially winning the title, (which, by a long shot, can be ruled out of the picture by a logical cricket fan). With just one match remaining, against Chennai Super Kings, all they can expect is to win and hope other results go their way to qualify.

Even then, it would not change the fact that Rahul would be too good a player for Punjab Kings. Period.

(The above story first appeared on LatestLY on Oct 05, 2021 05:29 PM IST. For more news and updates on politics, world, sports, entertainment and lifestyle, log on to our website latestly.com).