Gujarat Titans batter Matthew Wade has conceded that personally the IPL 2022 season hasn't gone the way he would have wanted, even though the team has made it to the final in its first year. 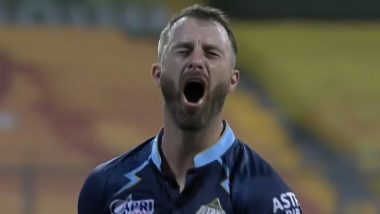 Ahmedabad, May 28 : Gujarat Titans batter Matthew Wade has conceded that personally the IPL 2022 season hasn't gone the way he would have wanted, even though the team has made it to the final in its first year. The 34-year-old Australian wicketkeeper-batter endured a frustrating IPL 2022 before finally scoring a circumspect 35 (off 30 deliveries) as the Titans overhauled Rajasthan Royals' total in Qualifier 1 to secure a place in the IPL 2022 final. IPL 2022: Sanju Samson Reveals, This Season for the Rajasthan Royals Is All About Shane Warne.

Wade said he was feeling frustrated until he scored a commendable 35 at the Eden Gardens in Kolkata in Qualifier 1. "It's been a frustrating tournament personally; I've been hitting the ball well, especially since I came back into the team. It just hasn't quite clicked, I found the fielders a little bit, just found ways to get out but I've played enough to know that happens for periods of time throughout T20 especially, but you've just got to stay brave and keep swinging the bat like you know you can swing it," Wade told cricket.com.au ahead of the IPL 2022 final against Rajasthan Royals here on Sunday.

Wade returned to playing in the IPL after 11 years, having played three games for Delhi Daredevils (Delhi Capitals) in 2011. While the Australian has reached double digits in all but two of his nine innings this IPL season, the 35 against Rajasthan has been his highest score. He was also not in the playing XI for six matches following a run of poor scores as the Hardik Pandya-led Titans included an extra bowler. IPL 2022: Kumar Sangakkara, Rajasthan's Coach Reveals, How Most of the Auction Purse Went Into Putting Together First Eleven.

"As a player, if there's a legitimate reason that you're not playing then it's quite easy and the reason that I was left out at that particular time is Hardik (Pandya) got injured so we were short a bowler," Wade explained, according to the report. "We basically went a batter short and took a little bit of pump with Rashid (Khan) batting seven, which paid off in spades; he's (Rashid) been amazing at seven so that was kind of why I initially went out of the team and then the way that Rashid, (David) Miller and (Rahul) Tewatia were batting, there was no reason to play the extra batter," added Wade.

Wade said that in the years to come, he would be comfortable playing franchise cricket if he gets the opportunity but if not, he won't chase them. "I'm not chasing franchise cricket so much, if it comes my way and I can play it, then I'll play it. If this is it for me -- one year, two years, three years at IPL -- it doesn't worry me too much. If I can play them out of the Australian season then I'm probably more leaning down that path at the moment," added Wade. "I just want to be comfortable, spend a little bit of time with my family after the World Cup and see where the last few years of my career is going to be."

(The above story first appeared on LatestLY on May 28, 2022 01:01 PM IST. For more news and updates on politics, world, sports, entertainment and lifestyle, log on to our website latestly.com).