IPL 2022: Kumar Sangakkara, Rajasthan's Coach Reveals, How Most of the Auction Purse Went Into Putting Together First Eleven

Rajasthan Royals head coach Kumar Sangakkara has credited the team's performance this season to the painstaking effort put in by his support team during the IPL mega auction earlier this year, saying 90-95 per cent of the purse was spent on putting together the first eleven. 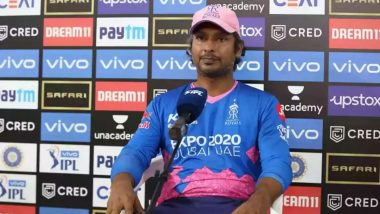 Ahmedabad, May 28: Rajasthan Royals head coach Kumar Sangakkara has credited the team's performance this season to the painstaking effort put in by his support team during the IPL mega auction earlier this year, saying 90-95 per cent of the purse was spent on putting together the first eleven. The Sri Lankan legend added that the entire focus was on "experience", given the high-pressure IPL environment, and added that while the side had a "spattering of youngsters", they were being groomed to become future stars. IPL 2022: Sanju Samson Reveals, He Was Playing an U-16 Game Somewhere in Kerala When RR First Won the Title in 2008.

Sankakkara also said that it was very difficult to overcome the big loss to Gujarat Titans in Qualifier 1 at the Eden Gardens and credited the boys for staging a fine comeback to defeat Royal Challengers Bangalore in Qualifier 2 at the Narendra Modi Stadium on Friday night. RR defeated RCB by seven wickets with 11 deliveries to spare as the Sanju Samson-led side overhauled the modest target of 157 in 18.1 overs. England's charismatic batter Jos Buttler hit a stroke-filled unbeaten 106, while Prasidh Krishna and Obed McCoy grabbed three wickets each to lead the Royals into the final for only the second time in the history of the tournament.

"Very satisfying (win). All the planning, all the hard work. Really tough with the close defeat to Gujarat Titans but the guys got back up and came back strongly. Jos Buttler backs his strengths and manoeuvres the bowling to bowl more and more to his strengths. The great thing is he can accelerate anytime. Overall he is a wonderful guy who thinks deeply about his game and himself. The entire bowling unit was outstanding. "Special mention to Prasidh (Krishna). We had 16 to defend in the last game. Then Trent Boult. And Obed McCoy, his mother has been quite ill back home, but he has been able to put that aside. She is recovering well. And Ashwin and Yuzi (Chahal) have run the show. At the auction table," said Sangakkara. RR vs RCB, IPL 2022 Match Result: Jos Buttler, Prasidh Krishna Send Rajasthan Royals to Their First Final Since 2008.

Sangakkara also revealed how, before the auction, his team compiled date on players in order to help build a winning unit. "We spent 90-95 per cent of our purse on putting together our first XI. We worked hard on data to work on the players we wanted. We put emphasis on experience at the moment. We have a spattering of youngsters who will become stars later, but our first XI has a strong share of seasoned internationals. Full credit to Giles Lindsay, our analyst, Zubin Barucha and the rest of the staff. Wins don't just happen. It takes a lot of planning, hard work, execution on the field," added the Sri Lankan.

(The above story first appeared on LatestLY on May 28, 2022 11:35 AM IST. For more news and updates on politics, world, sports, entertainment and lifestyle, log on to our website latestly.com).