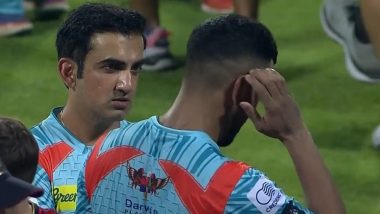 Kolkata, May 26: Wednesday was a forgetful day for Lucknow Super Giants as they dropped three catches in four overs, allowing Royal Challengers Bangalore to post a mammoth 207/4, with top-order batter Rajat Patidar slamming an unbeaten 112.

In reply, Lucknow skipper KL Rahul led the chase from the front with 79 off 58 balls. But his dismissal in the death overs brought an end to Lucknow's journey in IPL 2022 as they eventually the Eliminator by 14 runs at the Eden Gardens in Kolkata.

During the match, the TV broadcast had spotted Gambhir watching the action helplessly from the dugout with frustration rife on his face when Lucknow failed to grab their chances in the field.

"Dear Gautam Gambhir mind your own business, stay away from him. Leave KL Rahul alone and facilitate him with gifts and all...he is our proud future legend," wrote one fan. "GG to KL 'kardina Misbah wali harkat'," commented another fan.

"KL Rahul might become the greatest cricketer after these stare from Gambhir," typed a Lucknow supporter. "Aur kitna deep leke jaana hai match tumko? 22 over tak?," commented another fan. "I'm not sad that you and LSG lost... I'm sad because Virat won !!," wrote a cricket watcher.

Gambhir shared a post on Instagram on Thursday, vowing for Lucknow to come back stronger in IPL 2023. "Hard luck today but a great tournament for our new team. We'll come back stronger� Until we meet again! @lucknowsupergiants," read the caption. Lucknow Super Giants vs Royal Challengers Bangalore IPL 2022- 3 Reasons Why LSG Lost.

Rahul took to Twitter to thank Lucknow fans for their support during the side's debut IPL outing. "Inspiration all around me. A special first season comes to an end. Not the way we wanted, but we gave it absolutely everything till the very end."

"Thank you to the LSG family. To all our support staff, team management and Dr. Goenka. Lastly, thank you to our fans for all the love you've shown us over our first season. We'll be back."

(The above story first appeared on LatestLY on May 26, 2022 08:37 PM IST. For more news and updates on politics, world, sports, entertainment and lifestyle, log on to our website latestly.com).