RCB vs CSK, IPL 2022: Southern Derby Is Back and Bangalore are Hoping for a Turnaround

The 'Southern Derby' is back again this season and Royal Challengers Bangalore would be hoping for turning the tide on defending IPL champions CSK this time around when the two sides meet at the MCA stadium here later on Wednesday. 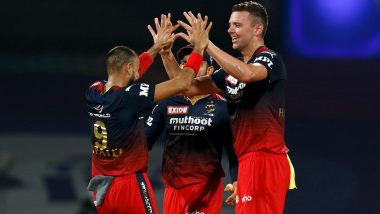 Pune, May 4:The 'Southern Derby' is back again this season and Royal Challengers Bangalore would be hoping for turning the tide on defending IPL champions CSK this time around when the two sides meet at the MCA stadium here later on Wednesday. The absence of pace bowler Harshal Patel the last time around the two sides met had probably rocked the RCB boat, as they lost the high-scoring game by 23 runs after conceding a mammoth 216 runs. In fact, RCB skipper Faf du Plessis too had attributed the defeat to the absence of Patel, who had to leave the IPL bio-bubble after getting the news of his sister's demise. "You see the value of Harshal (Patel), and what he offers. He has the ability to stop the game. We missed that (against CSK); we had a similar tone to the bowling. We lacked the variety we needed in our attack. Hopefully we can have him soon again," du Plessis had said after the loss. Virat Kohli Grinds It Out in the Gym With Wife Anushka Sharma (Watch Video).

But with Patel back in the side, RCB can hope for a turnaround, even as four-time IPL champions CSK will be buoyed by the display of fireworks from openers Ruturaj Gaikwad and New Zealand's Devon Conway in their previous game against Sunrisers Hyderabad, which CSK won by 13 runs. Gaikwad and Conway had stitched together a record 182-run opening stand, after which Mukesh Choudhary's four-wicket haul sealed a 13-run victory over SRH at the same venue on May 1. "I enjoyed batting with Devon. I am delighted for him as it was only his second match and he scored his maiden IPL fifty. We haven't played together much, but we spend a lot of time in my room. Hence, we got to know about each other's game, how we communicate and how we react to certain situations on the field. We already had off-field conversations and, thankfully, we shared a very good partnership," Ruturaj had said after the game. Super Kings and Bangalore have gone head to head 30 times, with CSK taking 20 wins and Bangalore getting nine wins, in addition to a no result. Gujarat Titans vs Punjab Kings IPL 2022: 3 Reasons Why GT Lost.

As for the results at the MCA stadium so far, of the nine games that have been played so far at this venue, the team batting first has had the advantage with six wins while the team chasing has been victorious on three occasions. The average first innings score is 173. RCB are currently sixth on the points table with 10 points following five wins, while the Mahendra Singh Dhoni-led CSK are ninth, with only three wins in nine games.

(The above story first appeared on LatestLY on May 04, 2022 11:44 AM IST. For more news and updates on politics, world, sports, entertainment and lifestyle, log on to our website latestly.com).