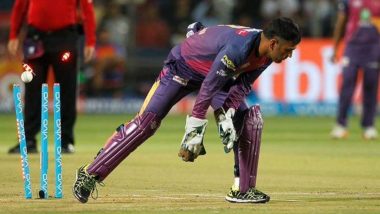 Rising Pune Supergiants did two changes ahead of the Indian Premier League 2017. First, they removed the ‘s’ at the end of the name of their franchise. This was a first. Mumbai Razors (Indians) and Kochi Indi Commandos (Tuskers Kerala) had changed their names before, but that was before they played their first match. Over years, Delhi Daredevils (Capitals) and Kings XI Punjab (Punjab Kings) would emulate Pune. IPL Controversies- Part 23: Harbhajan Singh vs Ambati Rayudu in 2016.

But the second decision raised more eyebrows. They sacked MS Dhoni as captain, appointing Steven Smith instead. But the protests subsided after Pune beat Mumbai Indians in their first match of the tournament by seven wickets. Smith top-scored with a 54-ball 84 not out. Dhoni remained unbeaten too, with a run-a-ball 12.

Harsh Goenka, brother of RPS owner Sanjiv and chairman of RPG, tweeted: ‘Smith proves who’s the king of the jungle. Overshadows Dhoni totally. Great move to appoint him as captain.’

The backlash from fans, of both Dhoni and the Pune team (as well as Chennai Super Kings) was severe. Goenka was forced to delete his tweet after a couple of hours. IPL Controversies- Part 22: Maharashtra Water Crisis and Aftermath.

Later in the same edition, Dhoni slammed 61 not out in 34 balls to help Pune beat Sunrisers Hyderabad. With two to win off the last ball, he hit Siddarth Kaul to the extra-cover boundary.

‘Masterful innings by Dhoni. Great to see him back in form. Nobody can be a greater finisher. Takes @RPSupergiants to a nail-biting win,’ tweeted Goenka.

Things had settled down.

(The above story first appeared on LatestLY on Sep 21, 2021 08:32 PM IST. For more news and updates on politics, world, sports, entertainment and lifestyle, log on to our website latestly.com).