Royal Challengers Bengaluru (RCB) have been grabbing a lot of limelight due to their recent social media activities. After deleting all their previous posts, the Indian Premier League (IPL) franchise unveiled their new logo for the upcoming season of the cash-rich league. Well, the new logo received a lot of appreciation from the fans due to its new lion design. Even RCB’s skipper Virat Kohli was also ‘thrilled’ to see the new logo and is excited to don the side’s latest jersey. However, Indian pacer Jasprit Bumrah has a somewhat different perspective towards RCB’s new emblem as he trolled the franchise by comparing the logo to his bowling action. RCB Funny Memes and Jokes Flood Twitter After IPL Franchise Unveil New Logo.

“Cool logo. Looks like my bowling action as well,” wrote Bumrah in the comment section of RCB’s Instagram post. In the logo, an animated lion is standing and his hands are drawn in such a way that it somewhat resembles to Bumrah’s stance when he is about to deliver a ball. Well, the fans also didn’t take long in identifying the resemblance and they also joined the speedster in the fun. Nevertheless, RCB will hope that just like the logo, their bowlers will also put up a similar bowling display like the number-two-ranked ODI pacer in order to guide RCB to their maiden title. 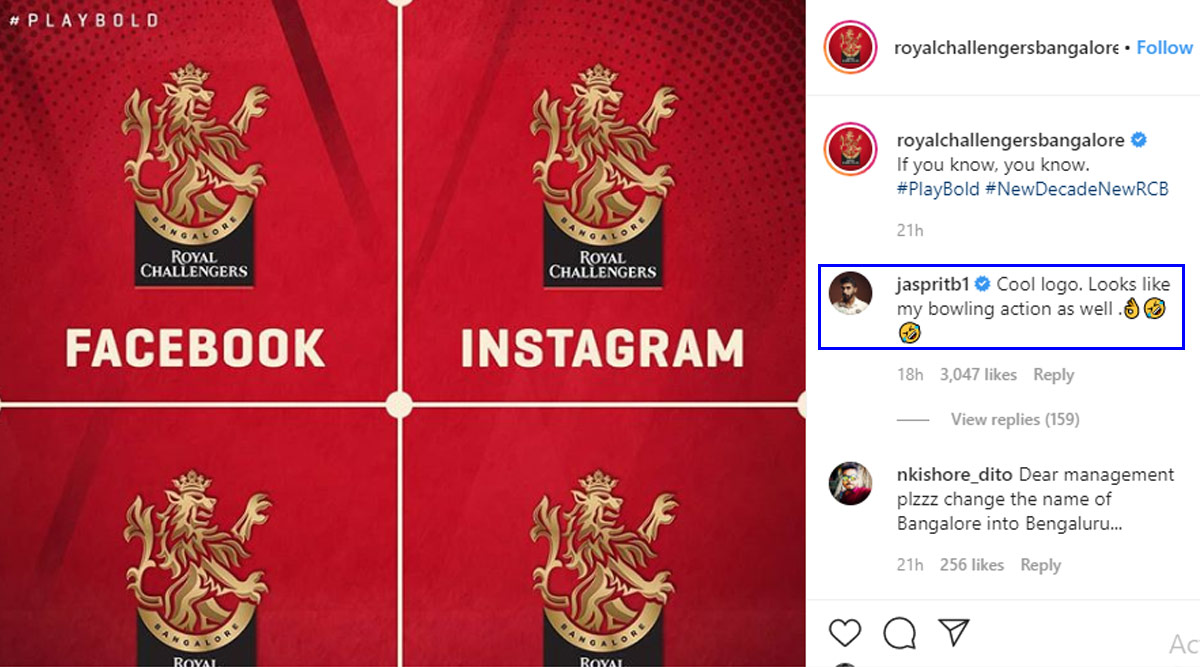 Speaking of Jasprit Bumrah, the pacer is currently the part of the Indian squad which is in New Zealand. After the mind-boggling T20I and ODI series, the two teams will now lock horns in the two-match Test series which will get underway on February 21. Bumrah hasn’t enjoyed a great outing in the ODI series as he went wicketless in all the three matches and will eye to make a thumping comeback in the longest format of the game.