Kagiso Rabada Birthday Special: 6/54 vs Australia and Other Stupendous Performances by the South African Speedster 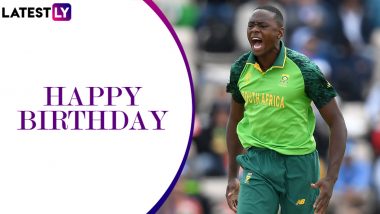 South Africa's pace spearhead Kagiso Rabada celebrates his 25th birthday on Monday (May 25, 2020). The right-arm speedster is one of the best pacers in the modern era and his records in all forms of cricket speak volumes of his prowess. Rabada possesses the ability to set the speed gun on fire and his tendency to nail Yorkers at will makes him an absolute's captain delight. Rabada has already achieved a lot in his short but highly impressive career and many also tout become one of the greats of the game. Below, we'll revisit some of his best performances. India, South Africa to Play 3 T20Is at End of August if COVID-19 Pandemic Subsides.

Rabada bursted onto the scenes with a staggering spell against Bangladesh on ODI debut. Since then, there was no looking back for the bowler as he bowled on fiery spell after another and became a leader of Proteas pace attack in all the formats of the game. Speaking of his record in international cricket, the speedster has claimed 197, 117 and 30 wickets in 43 Tests, 75 ODIs and 24 T20Is respectively. Well, these numbers are stupendous by any standards and will only get better with time. Meanwhile, let's look back at times when Rabada destroyed the opposition's batting order.

6/16 Vs Bangladesh in Dhaka

South Africa didn't have the services of Dale Steyn and Morne Morkel during the ODI series between against Bangladesh in 2015. However, a hurricane arose in the first ODI of the series and a fantastic career went underway. Rabada put up an exhibition of fast bowling and rattled the opposition's batting line-up. All the Bangladesh batsmen looked clueless in front of the pacer as the debutant claimed a six-wicket haul including a hat-trick. As a result, the home side was bundled out for 164 runs while batting first and Proteas registered an eight-wicket triumph.

AB de Villiers and Co posted a mammoth score of 438 runs while batting first in the 5th ODI of South Africa's 2015 Tour of India. The Wankhede track looked ideal for batting. However, that wasn't the case when the Men in Blue came on to bat. Rabada didn't take long in making a mark as he dismissed the likes of Virat Kohli and Suresh Raina early in the innings. He went on to scalp four wickets in the match as India got bundled out for 224 runs and lost the match by 214 runs.

Rabada bowled a fiery spell in the first Test of South Africa's 2016-17 Tour of Australia and knocked the home side out of the contest. After scalping two wickets in the second innings of the match, the young pacer looked at his prime in the last innings of the game. The Aussie batsmen failed to showcase any fight against the pacer as Rabada scalped a five-fer and helped Proteas win the match by 177 runs.

Another Kagiso Rabada special was seen during the fourth Test of England's 2016 Tour of South Africa. The Centurion track looked a batting paradise as the home side piled up a massive target of 475 runs in the first innings. However, the tables were turned when England players came out to bat. Rabada produced a staggering spell in the second innings and took seven wickets. He continued his purple patch in the last innings too and took six wickets. Riding on his efforts, the Proteas side won the game by 280 runs.

South Africa were on the back foot after losing the first match against Australia in the 2018 Test series. However, scores were settled in the second courtesy not one but two brilliant performances by Kagiso Rabada. The right-arm pacer made an impeccable use of the red cherry in the first innings of the game and took a five-wicket haul. He came up with an even better performance in the third innings as he took a six-fer. His efforts proved to be fruitful as the Proteas side clinched the game by six wickets.

In normal circumstances, Rabada would have been busy with Delhi Capitals in the 2020 edition of the Indian Premier League (IPL). However, just like many other major cricket tournaments, the T20 extravaganza has also been postponed owing to the outbreak of COVID-19 pandemic. Nevertheless, the ongoing year is still crucial for Rabada as the ICC T20 World Cup 2020 is scheduled to be played in October and the pacer will have the onus to guide South Africa to the title.

(The above story first appeared on LatestLY on May 25, 2020 08:00 AM IST. For more news and updates on politics, world, sports, entertainment and lifestyle, log on to our website latestly.com).