Kapil Dev Says Modern Batsmen Well-Suited to Bat at Any Position Thanks to T20s, Believes No. 4 Position Not an Issue for India at ICC Cricket World Cup 2019 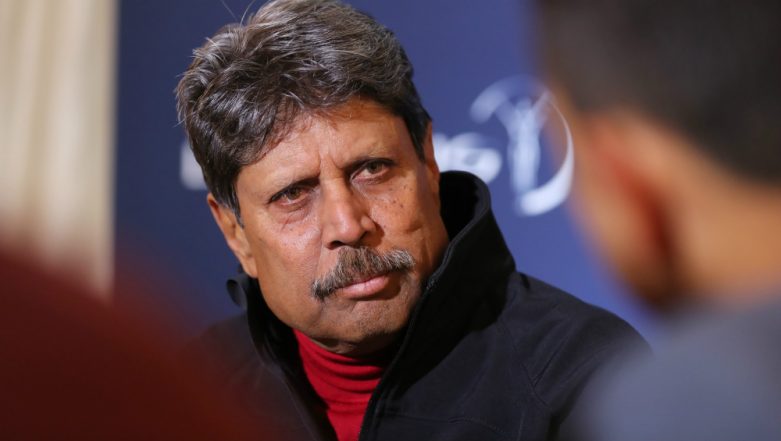 New Delhi, May 8: Even as the debate on whether Vijay Shankar was the right pick for India's no.4 slot at the upcoming World Cup refuses to die down, India's 1983 World Cup-winning captain Kapil Dev has a different take on the whole issue.

Speaking on the sidelines of a promotional event in the Capital, the former all-rounder said that with batsmen often playing at different positions for both their national teams as well as T20 franchises, they are all well-suited to bat in different positions. Vijay Shankar Part of Team India Squad For ICC World Cup 2019 Despite Being Out of Form In IPL 2019; Here's How Twitter Is Reacting.

"After seeing the T20s you can't even say for sure who is an opener and who is a no. 4 batsman. Now the mindset is anybody can play anywhere. In today's world, if you assign a number to a batsman it feels strange apart from an opener. And even openers are sent out at a different position many a times," Kapil said.

Shankar was chosen ahead of Ambati Rayudu by the selectors in April for the World Cup as chairman of selectors M.S.K. Prasad had said that Shankar provides a "three dimensional" option due to his ability with the ball.

Moving forward, the former captain was asked about his opinion on the chemistry between India captain Virat Kohli and M.S. Dhoni. Kapil said that while the pair have been successful, any chemistry would come naturally because they are playing for their country.

"It looks like they have done extremely well which is great for India. As far as chemistry goes, all the players should understand that they are playing for their country and so no other thought should come in their heads. It's not a husband-wife relation that you need a chemistry. You are playing under the flag of the country," said Kapil.

Kapil also praised India's pace department and opined that the conditions on offer in England should suit them. "I think they are fantastic. They have (Mohammed) Shami and (Jasprit) Bumrah who can bowl at 145-plus speeds. They can swing the ball also and so this is a very good combination that we have," the 60-year-old said.

Kapil expects India to finish at least in the top four and hopes to see England and Australia there as well. However, the fourth team can be a pick between a number of contenders he feels.

"New Zealand is good, so are Pakistan, West Indies and South Africa. India in particular are good because I feel they are one of the more experienced and well-balanced sides. They have four fast bowlers, three spinners and in the end you have Virat Kohli and MS Dhoni," he said.