A defeat to Punjab Kings in their last match did derail them a bit but Eoin Morgan's Kolkata Knight Riders would be eager to leave no stone unturned as they plan on defeating Sunrisers Hyderabad in match 49 of IPL 2021. Can the Knight Riders win to brighten their chances of making it to the playoffs? Or would the 2016 champions spoil the party for the Knight Riders? 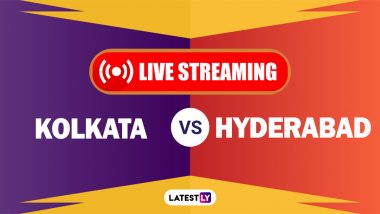 Kolkata Knight Riders (KKR) would lock horns against Sunrisers Hyderabad (SRH) in a desperate bid to keep their playoff hopes alive in IPL 2021, on Sunday, October 3. The match would be played at the Dubai International Cricket Stadium and is set to begin at 7:30 pm IST (Indian Standard Time). Knight Riders might be currently placed fourth place on the points table but they are in a tricky situation as there are three other sides with the same number of points trying hard to overthrow them from the first half of the table. KKR need to win this and also their next match if they have to stay in contention for making it to the playoffs. KKR vs SRH Preview: Likely Playing XIs, Key Battles, Head to Head and Other Things You Need To Know About VIVO IPL 2021 Match 48

For Kolkata Knight Riders, Sunrisers Hyderabad can turn out to be a challenging opposition. Yes, they have nothing left to play for this season but the 2016 champions would be more than willing to spoil the party for Eoin Morgan and co, who are aiming to make their first playoffs in three years. The likes of Jason Roy and Jason Holder can come good for Hyderabad and Kolkata would have to rethink their foreign player combination for this match. With Andre Russell and Lockie Ferguson injured, KKR might just include Shakib Al Hasan in their side as the Bangladesh all-rounder is a solid option to bat in the middle-overs. Also, his left-arm spin can come in handy for the Knight Riders. KKR would also be worried about skipper Eoin Morgan's form and expect him to find some rhythm with the willow to add some runs in the middle-overs. KKR vs SRH, Dream11 Team Prediction IPL 2021: Tips To Pick Best Fantasy Playing XI for Kolkata Knight Riders vs Sunrisers Hyderabad, Indian Premier League Season 14 Match 49

Those unable to watch the KKR vs SRH match live on television can follow the game online. Disney+Hotstar will be live streaming the Kolkata Knight Riders vs Sunrisers Hyderabad match online for its fans in India. Fans, however, need to subscribe to Hotstar by paying a nominal subscription fee. JIO are also providing Hotstar subscriptions on select plans.

(The above story first appeared on LatestLY on Oct 03, 2021 02:38 PM IST. For more news and updates on politics, world, sports, entertainment and lifestyle, log on to our website latestly.com).