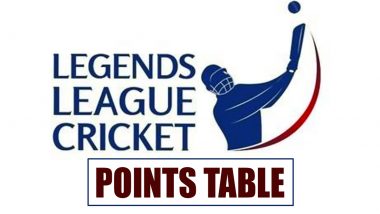 India Capitals retained their second spot on the Legends League Cricket 2022 points table on September 21 after the match between Bhilwara Kings and Gujarat Giants was abandoned due to rain. Gujarat Giants held on to their top spot on the table with five points from three games. Bhilwara Kings and Manipal Tigers make up the table respectively. Legends League Cricket 2022: Here's A Quick Recap of Last Edition of T20 Tournament Featuring Retired Cricketers

Legends League cricket 2022 will last for 20 days from 16 September to 5 October. The league stage of the tournament will be played in a double round-robin format; that is, each team will play the other three teams twice in the stage matches to amass as many points on the table. As the league stage matches end, the top two teams from the points table will then play the first qualifier match. The winner of the first qualifier will progress directly into the final. For the second finalist spot, the loser of the first qualifier will brawl against the third-placed team from the league stage on the points table. And that's how the second finalist of the Legends League cricket will be confirmed.

The first league stage match will be played between India Capitals and Gujarat Giants on 17 September at Eden Gardens, Kolkata. Former Indian openers, Gautam Gambhir and Virender Sehwag will be leading the two teams respectively. The final of the Legends League cricket will be played on 5 October and the venue for the same is yet to be announced.

(The above story first appeared on LatestLY on Sep 17, 2022 07:20 PM IST. For more news and updates on politics, world, sports, entertainment and lifestyle, log on to our website latestly.com).