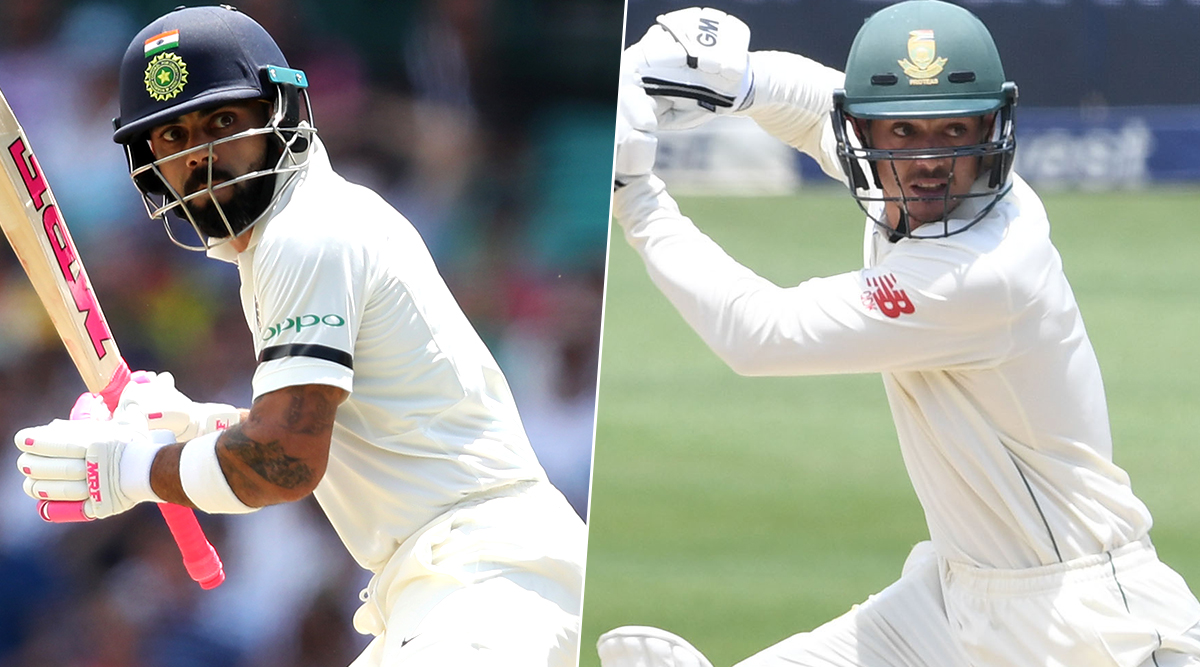 India will want to seal the series when they face South Africa in the second game of a three-match Test series at the Maharashtra Cricket Stadium in Pune on October 10, 2019 (Thursday). Powered by superlative hundreds from opening duo Rohit Sharma and Mayank Agarwal, India thumped South Africa by 203 runs in the opening Test and will hope to seal the Test series with another big victory at Pune. The massive win also strengthened India stay at the top of ICC World Test Championships 2019-21. Fans can catch the live-action of the 2md India vs South Africa Test match on Star Sports channels and live-stream it on Hotstar. Prasar Bharati Sports will also be providing the live audio commentary of the game. Meanwhile for more details on the live telecast, online free live streaming, team details and live scores of the IND vs SA 2ndTest match, please scroll below. India Vs South Africa, Cricket Score 2nd Test Match.

Rohit Sharma, making his debut as an opening batsman for India in Test cricket, singlehandedly blew a toothless South African attack apart. The 32-year-old, in the company of Mayank Agarwal, smashed several records on their way of stitching the third-highest opening partnership in Test cricket for India. Mayank went a step ahead of his opening partner and slammed his first double century in Test cricket to help India cross the 500-run barrier. India vs South Africa 2nd Test 2019: R Ashwin vs Quinton de Kock & Other Exciting Mini Battles to Watch Out for in Pune.

But Rohit returned to score another century in the second innings and joined an illustrious list in Test cricket record books. Rohit’s 127from just 149 deliveries, which comprised of 7 maximums and 10 boundaries, in the second innings helped India set South Africa a near impossible 395 runs target. South Africa bundled for only 191 in the chase with their first innings’ centurions Dean Elgar and Quinton de Kock returning for single-digit scores. De Kock, who became the first Protea wicketkeeper-batsman to score a Test century in India was clean-bowled for a two-ball duck. Shami took a five-wicket haul as India romped home by 203 runs. Rohit Sharma Can Surpass Virender Sehwag's Record of Most Sixes Against South Africa by an Indian Batsman in IND vs SA 2nd Test 2019.

Those not following the live-action of 2nd India vs South Africa Test match on television can watch the game live online. Hotstar, which is the official online media platform of Star, will be live-streaming the IND vs SA 2nd Test match online for its fans. JIO users can also catch the live-action on the JIO App.

India’s spinning duo of Ravi Ashwin and Ravindra Jadeja combined for 14 of the 20 South African wickets that fell in the first Test in Visakhapatnam. Both also achieved personal milestones in the game with Jadeja becoming the fastest left-arm spinner to take 200 Test wickets, while Ashwin equalled Muttiah Muralitharan’s record of being the fastest bowler to complete 350 wickets in Test cricket. South Africa would need an answer to tackle them if the visitors want to fightback in the three-match Test series.