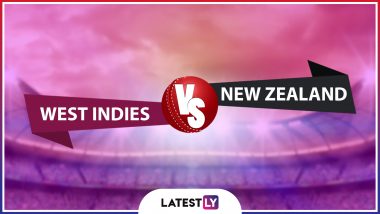 Unbeaten New Zealand will eye the semi-finals when they face West Indies in match no 29 of ICC Cricket World Cup 2019 on June 22 (Saturday). Skipper Kane Williamson’s master-class century under pressure against South Africa will give New Zealand the belief that another victory could see them through to the last four. West Indies, on the other, are in search of one such player, who could lift their spirits. But the Caribbean boys do enough to remember their final CWC19 warm-up game against the same opposition. It is a do-or-die situation for the West Indies but the Kiwi fans will be delighted knowing another victory for the Black Caps in the West Indies vs New Zealand fixture could seem their team through. The WI vs NZ match will be live and exclusive from Old Trafford, Manchester. Fans wanting to watch this WI vs NZ will be excited to know that Hostar will be live streaming the match online, while there are also several broadcasting channels, including Star Sports, SKY TV and several others, which will be live telecasting the game. Viewers and fans of both these teams can find every related information of this clash below.  West Indies vs New Zealand Cricket Score 29th ODI Match.

West Indies have moved far behind from the promise they showed in the dominant victory against Pakistan in their opening World Cup 2019 match. They have already lost three matches on the trot excluding the washed-out game against South Africa. They are placed seventh in the points table with just three points after five games. New Zealand, in contrast, have nine from the same no of matches. A win in the WI vs NZ game would take them to the top of team standings.  WI vs NZ, ICC Cricket World Cup 2019: Chris Gayle vs Trent Boult and Other Exciting Mini Battles to Watch Out for at Old Trafford.

The Caribbean boys, however, can take inspiration from Sri Lanka’s amazing victory over hosts England which has thrown the 2019 World Cup open again. They can be the biggest benefactors from that win and will want to further increase their chances of making it to the semi-finals with a good victory against New Zealand. Now, the Jason Holder-led team already has many fans present in Manchester as a result of their next two matches being the same stadium. But for those not present should not be disappointed. You can always can the live telecast on television in both New Zealand and West Indies as well catch the game online through various live streaming online platforms.

West Indies vs New Zealand, match no 29 of ICC Cricket World Cup 2019, will be played at the Old Trafford Cricket Ground in Manchester on June 22 (Saturday). The WI vs NZ match will start at 06:00 pm IST (Indian Standard Time) or 12:30 GMT local time. The Toss is expected to take place at around 5:30 pm IST or 12:00 GMT. WI vs NZ Dream11 Team Predictions: Best Picks for All-Rounders, Batsmen, Bowlers & Wicket-Keepers for West Indies vs New Zealand in ICC Cricket World Cup 2019 Match.

Not able to catch the WI vs NZ game on television? Please do not be worried. There are also several online platforms which will be live streaming and live telecasting the match online.  Hotstar, the official digital platform of Star Sports, will be live streaming the match online. Meanwhile, you can also follow LatestLY for free live score updates of West Indies vs New Zealand along with ball-by-ball commentary.

West Indies will be without star all-rounder Andre Russell, who will miss out after failing to fully recover from the knee injury that had been troubling him in the last couple of matches. They are in a must-win situation and know that another defeat will knock them out of the 2019 World Cup. New Zealand are in a winning-run of four matches with the exception of a washed out game against India.

(The above story first appeared on LatestLY on Jun 22, 2019 04:45 PM IST. For more news and updates on politics, world, sports, entertainment and lifestyle, log on to our website latestly.com).