WI vs NZ, ICC Cricket World Cup 2019: Chris Gayle vs Trent Boult and Other Exciting Mini Battles to Watch Out for at Old Trafford 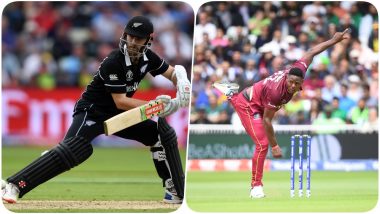 The 29th game of the 2019 ICC Cricket World Cup will see New Zealand squaring-off against West Indies on June 22, i.e. Saturday. The double-header contest will be played at the Old Trafford Stadium in Manchester, England, with its start time said to be 6.00 PM IST. The toss of the match will take 30 minutes prior to it, i.e. 6.00 PM IST. With 4 wins in 5 matches they have played so far in World Cup 2019, New Zealand is a very good position currently, i.e. 2nd spot. West Indies vs New Zealand Cricket Score 29th ODI Match.

On the other hand, West Indies is fighting way hard to bring the missing zing in their campaign back, so that they are left with choices to qualify for the semi-finals. As New Zealand and West Indies gear up for the all-crucial match, we at LatestLY bring you a list of mini-battles that will make the fans see the match feel more excited. WI vs NZ Dream11 Team Predictions: Best Picks for All-Rounders, Batsmen, Bowlers & Wicket-Keepers for West Indies vs New Zealand in ICC Cricket World Cup 2019 Match 29.

Chris Gayle is not in the best of form that he is in but can take apart any bowling unit on his given day. The New Zealand team is wary of the threat that Gayle poses and would be looking up to their frontline bowler to negate any kind of challenge that Gaye possesses. It will be delighting to see the battle between pace vs power.

Kane Williamson is coming off a rollicking match-winning century and would be looking forward to carry the same momentum. The Men in Maroon would hence hope their bowler-in-form Oshane Thomas to send Williamson back early. Will he be able to or will he not be able to will be a tough duel between the two.

Lockie Ferguson would be eyeing to keep a check on the Windies’ batsmen, especially Shai Hope. Ferguson’s raw pace and bounce would be more than just a challenge for Hope, who has for the better part of the tournament held the West Indies’ together in the middle overs. Will Ferguson win over Hope and manage to succeed in breaking Windies’ middle order resistance, or will Hope sail through the stormy Ferguson as he takes the field.

New Zealand hasn’t lost any game in the World Cup 2019 so far and is comfortably placed on the second place of the ICC World Cup 2019 Points Table. As for West Indies, another loss in the tournament will knock them all but out of the 2019 World Cup event. Stay tuned to LatestLY for all the latest updates about ICC Cricket World Cup 2019.

(The above story first appeared on LatestLY on Jun 22, 2019 04:00 PM IST. For more news and updates on politics, world, sports, entertainment and lifestyle, log on to our website latestly.com).