New Zealand vs West Indies will be played at Old Trafford Stadium in Manchester, England, on June 22, Saturday, with the match scheduled to begin at 06.00 PM IST. For the fans who follow fantasy cricket, i.e. Dream11 cricket, they will follow this match closely to earn more points. 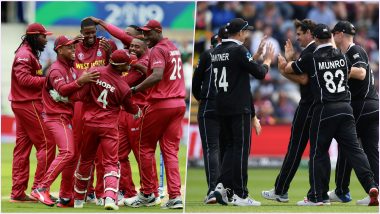 In the 29th match of the ICC Cricket World Cup 2019, it will be the invincible (so far) team, New Zealand taking on the out-of-form West Indies, who is on the verge on the ouster from the tournament. The double-header contest will be played at the Old Trafford Stadium in Manchester, England, on June 22, Saturday, with the match scheduled to begin at 06.00 PM IST. West Indies vs New Zealand Cricket Score 29th ODI Match in ICC Cricket World Cup, 2019.

For the fans who follow fantasy cricket, i.e. Dream11 cricket, they will be following this match closely so as to earn more points from this New Zealand vs West Indies, World Cup 2019 match. Here we take into account the current form and numbers to assist you to make a strong playing 11 comprising of best bowlers, batsmen, all-rounders, and wicket-keepers for NZ vs WI, WC 2019 game. West Indies vs New Zealand Betting Odds: Free Bet Odds, Predictions and Favourites During NZ vs WI in ICC Cricket World Cup 2019 Match 29.

You can select 1-4 wicket-keepers, as per the new rules. There are numerous options to choose wicket-keepers from both West Indies, and New Zealand. However, we will pick only two – Tom Latham (New Zealand) and Shai Hope (West Indies) in this Dream11 team, because of their better quality.

You can select only 3-6 batsmen in their side as per the rules. Both West Indies and New Zealand boast of immense talent in their respective squads. However, when it comes to choosing for this Dream11 team, one should pick New Zealand’s Kane Williamson and Martin Guptill; whereas, Shimron Hetmyer and Chris Gayle of West Indies. WI vs NZ Head-to-Head Record: Ahead of ICC Cricket World Cup 2019 Clash, Here Are Match Results of Last 5 West Indies vs New Zealand Encounters!

You can pick 1-4 all-rounders in the side as per the latest rules. WIth Andre Russell missing in action due to an injury and no other option to play in this Dream11, Colin de Grandhomme fits the bill perfectly. Had Russell been fit, Grandhomme would have still the made the cut.

You can select 3-6 bowlers in your Dream11 team as per the new rules. Both New Zealand and West Indies are filled with extraordinary talents in their ranks, especially bowlers. However, with only 4 spots remaining in the side, we can pick Trent Boult and Lockie Ferguson of New Zealand, and West Indies’ Oshane Thomas, and Sheldon Cotrell.

Kane Williamson is coming off a spectacular match-winning inning, and would be in great form. Also, Trent Boult is likely to emerge as the star of the day and hence both Williamson and Boult are appointed as captain and vice-captain of this Dream11 team.

(The above story first appeared on LatestLY on Jun 22, 2019 11:18 AM IST. For more news and updates on politics, world, sports, entertainment and lifestyle, log on to our website latestly.com).