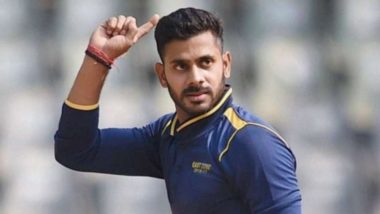 New Delhi, May 27: Former Kolkata Knight Riders batsman Manoj Tiwary was not too impressed when the franchise failed to mention him in a tweet commemorating the day they won their first Indian Premier League (IPL) title. KKR had on May 27 2012, beaten Chennai Super Kings by five wickets to win the fifth season of the IPL. The franchise on Wednesday sent out a tweet asking fans what their favourite memories were from the day and mentioned then-captain Gautam Gambhir, Manvinder Bisla, who was Man of the Match, star spinner Sunil Narine, former New Zealand batsman Brendon McCullum and former Australian fast bowler Brett Lee in the tweet.

"27 May 2012 - A night close to every Knight Rider's (heart) The first always has too many emotions, too many memories. What's yours?#KKR #IPL #IPL2012 #KorboLorboJeetbo #Champions @Bisla36 @GautamGambhir @Bazmccullum @SunilPNarine74 @BrettLee_58 (sic.)" their tweet read. Manoj Tiwary Has a Message of Unity for India Amid Lockdown; Cricketer Says Respect Every Religion, Wishes Ramadan Mubarak in Another Tweet.

Tiwary, who was also a part of that team, said that KKR were ignoring the efforts made by him and Bangladesh all rounder Shakib Al Hasan by not putting their handles among the mentions in the tweet.

"Yes I, along with others have too many memories, emotions and that will remain forever but after seeing this tweet where u all forgot to mention n tag me and @Sah75official is insulting and this mrng tweet of urs will remain close to every knight Rider's (heart) #disappointed (sic.)" he tweeted.

KKR then pointed out in reply to Manoj's tweet that he had in fact been tagged in the image. "No way, Manoj. We would never miss tagging such a special 'knight' to our special night. You were, and always be a hero of that 2012 victory," they said.

(The above story first appeared on LatestLY on May 27, 2020 09:29 PM IST. For more news and updates on politics, world, sports, entertainment and lifestyle, log on to our website latestly.com).