Mumbai Indians bowling coach Shane Bond is seeing some positives going into the 2023 IPL season, with several of his fast bowlers bowling incisive spells even though the five-time champions' campaign in the tournament this year has ended on a dismal note. 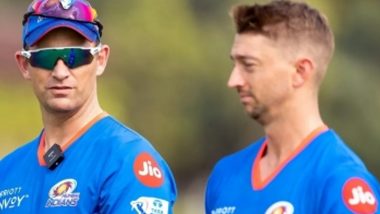 Mumbai, May 13: Mumbai Indians bowling coach Shane Bond is seeing some positives going into the 2023 IPL season, with several of his fast bowlers bowling incisive spells even though the five-time champions' campaign in the tournament this year has ended on a dismal note. The former New Zealand pace bowler was especially impressed with the performance of left-arm Australian pacer Daniel Sams, who took three wickets for 16 runs against Chennai Super Kings on Thursday, reducing the four-time IPL champions to 97 all out. In reply Mumbai Indians overhauled the target in the 15th over for the loss of five wickets. CSK vs MI, IPL 2022: Rohit Sharma Happy To See Wankhede Pitch Offering Swing and Bounce for a T20 Game.

Bond conceded that it took some time for the bowlers to settle down, adding that the outcome had become clearer in the last few games, which would help the side in the upcoming editions of the tournament. "As a bowling unit, we have been better for 4-5 games. They (pace bowlers) were understanding their roles and the last few games, we have been more aggressive, we have bowled more short balls. At the same time, we have also been calm in tough situations," felt Bond. "We have had consistent performances now, we have played well earlier as well but a few bad overs had knocked us out of games. That has not happened recently, so that's a big improvement," he added.

Speaking about Sams' spell, who had a tough start to the season, Bond said that the bowler himself had admitted to him that he was feeling downcast before he finally turned it around in the last couple of games. "I have known Dan for a long time, so we have a close working relationship. He would admit it was disappointing early in the season but he worked really hard. Now he is taking key wickets for us up top, that over against GT was unbelievable as well. It's great to see a player get a run of performances, he is a quality player and he is getting better and better," said Bond. IPL 2022: MS Dhoni Reacts After CSK's Poor Display Against MI, Says 'It’s a Kind of Game Where You Learn a Lot'.

On the decision to promote Sams up the order, Bond said that it was not a spur-of-the-moment decision, but a planned one. "We did not just send him up to shield our batters against the swing, we wanted Dan to show his talent with the bat. We know he can do that role," he said. Bond was also all praise for the in-form Bumrah and youngsters like Hrithik Shokeen and Kumar Kartikeya Singh, who have shone with the ball in the chances they have got.

"I love to talk about Boom (Bumrah), he is a wonderful player. He often doesn't get wickets that he deserves sometimes, that 5/10 vs KKR could have happened on a lot of other days. It's nice to see him get some rewards. Hrithik is a confident character, he has got some good skills and he has been bowling well, it's the same with Kartikeya. It's nice to see these young spinners bowling well," concluded Bond.

(The above story first appeared on LatestLY on May 13, 2022 12:02 PM IST. For more news and updates on politics, world, sports, entertainment and lifestyle, log on to our website latestly.com).