Earlier this year, Shami had revealed that he had played in the 2015 World Cup in Australia and New Zealand with a fractured knee. He was the second highest wicket-taker for India (17 wickets from 7 matches) behind Umesh Yadav (18 wickets) and the fourth-highest overall in the tournament. 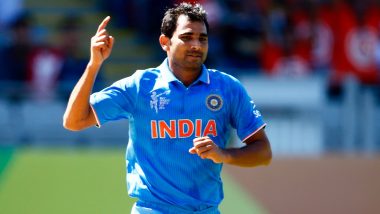 New Delhi, October 3: India's pace spearhead Mohammad Shami has opened up about the knee injury he suffered in 2015 and the speculation thereafter that his career was coming to an abrupt end.

Earlier this year, Shami had revealed that he had played in the 2015 World Cup in Australia and New Zealand with a fractured knee. He was the second highest wicket-taker for India (17 wickets from 7 matches) behind Umesh Yadav (18 wickets) and the fourth-highest overall in the tournament.

"In 2015 and even back in 2018 when I faced an injury, the media said that my career would be over. The media reported that even if I come back, I won't be the same Shami, and I agree that I am not the same that I was a few years back," said the Indian pacer while speaking on Amstrad InsideSport Face 2 Face cricket series. IPL 2020 Purple Cap Holder List Updated: Mohammed Shami of KXIP Remains On Top, Check Leading Wicket-Takers in Dream11 Indian Premier League Season 13 in UAE.

"And that's the only correct thing that they have said. This comment motivated me a lot to do better in the game for which I am known," he added.

The right-arm pacer, who is currently playing for Kings XI Punjab in the Indian Premier League (IPL), also emphasised on the importance of mental strength.

"Everyone faces some problem or the other in their lives. To set a goal and to achieve it, you need to plan a chart and work accordingly. I believe that everyone has to face a difficult phase in life to refocus and work in the right direction," he said.

"I remember after my injury, I weighed almost 95 kg and I felt that what people are saying is true and I can't do anything about it. But then I had a ball next to me throughout the 60 days of my bed rest. You don't have to forget things in life and you have to learn and adapt to the situation and you can't lie to yourself, especially with regard to your profession," Shami added.

Shami has been in great form for the Kings XI so far in IPL 2020, having picked up eight wickets in four games.

"When the lockdown started, I took 20-25 days off, but I pushed myself to utilise all the things I had which were needed for practice. Even though it gets a bit boring to practice alone, but luckily I had my friend and my brother for the practice. The training during the lockdown and a month of practice in the UAE helped me keep the momentum," Shami said.

According to the Indian pace spearhead, a human body doesn't function like a car wherein a tank could be filled with petrol and it will run smoothly thereafter.

"Obviously, it takes time for any person to get back on the routine. It gets difficult for even office workers, so imagine how difficult it must be for a sportsperson to step out from the leisure of their homes," said Shami. IPL 2020 Orange Cap Holder List Updated: Mayank Agarwal of KXIP Remaisn Top, Faf Du Plessis Moves Clear in Third, Check Leading Run-Scorers in Dream11 Indian Premier League Season 13 in UAE.

"The most difficult thing for a sportsperson is to maintain his weight and fitness levels which becomes very crucial. I am very happy that I have been able to utilise what I got from cricket to keep myself in good shape," he added.

(The above story first appeared on LatestLY on Oct 03, 2020 07:38 PM IST. For more news and updates on politics, world, sports, entertainment and lifestyle, log on to our website latestly.com).