MS Dhoni Turns 40: Three MSD Captaincy Records Which Will Be Tough to Break for Virat Kohli and Future Indian Skippers

MS Dhoni is rated highly for his captaincy skills. Dhoni made his way to the top quickly and was named as captain of the Indian side just three years after making his debut. On Dhoni's birthday, we take a look at some records held by him which will be hard for current, Virat Kohli, and future Indian skippers to break. 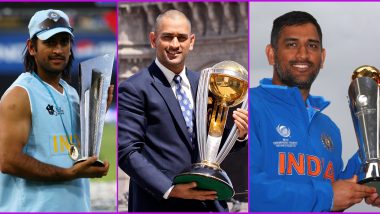 MS Dhoni turns 40 today. Captain Cool is MS Dhoni’s middle name. The former Indian cricket team skipper is rated highly for his captaincy skills. Dhoni made his way to the top quickly and was named as captain of the Indian side just three years after making his debut. He then took over as captain in all formats and was highly successful. In 2014, Dhoni handed the Test captaincy responsibilities to Virat Kohli, and in 2017 he stepped down as captain of ODI and T20I teams. However, Dhoni continued to lead the Indian Premier League (IPL) franchise Chennai Super Kings (CSK). Dhoni has led CSK to three IPL titles apart from two Champions League T20 titles, thus affirming the belief that he is indeed ‘captain cool’. MS Dhoni Birthday Special: From a Football Goalkeeper to Indian Cricket Team Wicketkeeper, Lesser-Known Facts About CSK Captain As He Turns 39.

Dhoni, born on July 07, 1981, in Ranchi, Bihar (now in Jharkhand) turns 40 today. On his birthday, we take a look at some records held by Dhoni which will be hard for current, Kohli, and future Indian skippers to break.

Only Captain To Win All Three ICC Trophies: Dhoni is the only captain to have won three ICC trophies. He was India’s captain when the Men in Blue won 2007 T20 World Cup. In 2011, Dhoni guided India to the second ODI World Cup at home. And in 2013, he managed to add another ICC trophy in his cabinet with the Champions Trophy title. MS Dhoni Birthday Special: Times When Former Indian Captain and His Daughter Ziva Dazzled Social Media (Photos and Videos Inside).

Only Indian Captain to Win MOM in World Cup Final: Under Dhoni India won the 2011 Cricket World Cup. He not only became the first captain to win a World Cup at home but ended up being Man of the Match as well. India have made it to three World Cup finals (1983, 2003 and 2011) and Dhoni is the only Indian captain to win MOM award in the summit clash. In 1983, Mohinder Amarnath and in 2003 Ricky Ponting were named Man of the Match.

Apart from these, Dhoni holds many records as a captain and as an individual. Under Dhoni’s captaincy, India topped the ICC Test Rankings for the first time in 2009. The 39-year-old has also played most matches (332) as captain by any player across all formats.

(The above story first appeared on LatestLY on Jul 07, 2021 09:15 AM IST. For more news and updates on politics, world, sports, entertainment and lifestyle, log on to our website latestly.com).