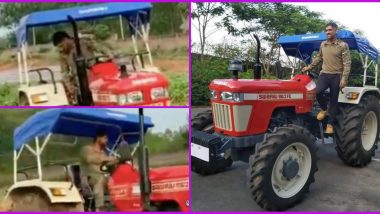 With no cricket action taking place former Indian captain Mahendra Singh Dhoni is enjoying his time with family at Ranchi farmhouse. Earlier, this month, Chennai Super Kings (CSK) shared a video of Dhoni driving a tractor. Now in the latest video, which is going viral, the wicketkeeper-batsman is seen ploughing the field on a tractor. The video clip, now viral, was shared on the fan page of Dhoni on Instagram. After the Indian Premier League (IPL) 2020 was postponed due to coronavirus pandemic, Dhoni travelled to Ranchi and is staying with his wife Sakshi and daughter Ziva. MS Dhoni Song: Chennai Super Kings All-Rounder Dwayne Bravo Reveals Release of New Song on CSK Captain's Birthday (Watch Teaser).

Meanwhile, in the viral video, the CSK captain can be seen trying his hands at ploughing on a tractor. Dhoni, it appeared, loved his shot at the farming and can be heard saying "Ek round aur" (One more round) in the video.

Dhoni was last seen in action last year in the ICC Cricket World Cup 2019 semi-final against New Zealand. Following India's ouster, Dhoni decided to take a sabbatical from cricket. He did miss many series post-world cup and was set for a comeback to cricket field with IPL 2020. The postponement of IPL has left Dhoni's fans waiting in anticipation to see their favourite cricketer in action.

(The above story first appeared on LatestLY on Jun 27, 2020 07:52 PM IST. For more news and updates on politics, world, sports, entertainment and lifestyle, log on to our website latestly.com).