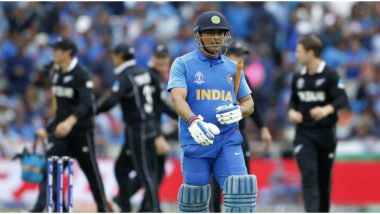 MS Dhoni walking off the cricket field for the field in Indian colours is a sorry moment for fans worldwide. Dhoni, 39, made his final appearance for the Indian team at the 2019 ICC Cricket World Cup semi-final against New Zealand. India lost that match by 18 runs and were knocked out of the World Cup with Dhoni’s international journey ending in a disappointing run-out. He cried on the way out – reports later said it was due to a thumb injury he suffered during the match. Video of Dhoni walking into the pavilion for one last time in Indian colours has gone viral after the 39-year-old’s announcement to quit. MS Dhoni Has Not Retired From IPL, Will Play Upcoming Season in UAE; Here’s Why.

Dhoni made his debut for India in 2004 against Bangladesh and was run-out after facing just one delivery. He went to play for the men in blue in 350 ODI matches, 90 Tests and 98 T20Is and scored over 15, 000 international while also taking 634 catches and effecting 196 stumpings. His last international appearance was against New Zealand at the Old Trafford Cricket Ground in Manchester in the ICC World Cup semi-finals. MS Dhoni’s Wife Sakshi REACTS to His International Retirement Announcement on Independence Day, View Instagram Post!

India were set a target of 240 runs and found themselves tottering at 71/5 when Dhoni stepped into the crease – no one knew then it will the final time we saw him in Indian colours. He joined Hardik Pandya and slowly took India closer to 100 runs but lost Pandya soon. Ravindra Jadeja and Dhoni (both teammates at Chennai Super Kings) then rebuild the innings with a 116-run partnership for the seventh wicket. But with India needing 32 runs to win 14 deliveries, Jadeja departed after skying a full delivery to mid-off.

Saved this clip.. hoped never to use it. 😢

MS Dhoni.. walking off for the last time in Team India colours! 🇮🇳🏏🏆🙌👏

Dhoni was left to drag India home single-handedly and he responded with a boundary off Lockie Ferguson. But was run-out in the third delivery of the 49th over while attempting a double. Dhoni mistimed a pull to square leg and sets off for a quick double but fell short with Martin Guptill hitting the bull’s eye with a direct throw. MS Dhoni was run-out and his international career curtained to an end.

He immediately took a two-month sabbatical from cricket to get trained with the territorial army but had not returned to the field or commented on his future even after a year. Eventually, on a fine Saturday evening on August 15, Dhoni announced his retirement from international cricket with a video post on Instagram.

(The above story first appeared on LatestLY on Aug 15, 2020 10:24 PM IST. For more news and updates on politics, world, sports, entertainment and lifestyle, log on to our website latestly.com).