MS Dhoni’s Video of Him Saying, 'India Will Lose to Pakistan Someday in a World Cup Match' Resurfaces Following Virat Kohli and His Side’s Humiliating Loss to Arch-Rivals in T20 World Cup 2021 Match

MS Dhoni, at a press conference following India's win over Pakistan in the 2016 T20 World Cup had said, "It is a reality that we would lose at some point of time. If it's not today, then it will be after 10, 20, or 50 years." The video of him saying these lines resurfaced following India's painful loss to arch-rivals Pakistan by 10 wickets at the T20 World Cup 2021. 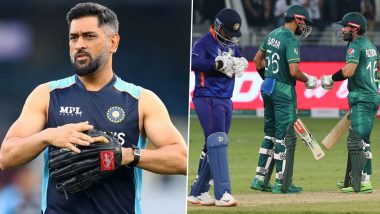 India's humiliating loss to Pakistan is yet to sink in and well, many Indian fans are still in shock of what transpired between these two sides at the Dubai International Stadium on Sunday, October 24. Batting first, India's plans of a good total were dashed by the brilliance of Shaheen Shah Afridi and Virat Kohli's fighting 57 off 49 balls guided them to a decent 151/7. But Pakistan skipper Babar Azam and his opening partner Mohammad Rizwan took apart the Indian bowling in a very clinical chase, fetching their side a massive win by 10 wickets with 13 balls to spare. Pakistan snapped their 12-match losing streak to India in World Cup matches with this remarkable win and it was indeed a historic night for all who rooted for the 2009 champions to come out as victors. Use of Word 'Kufr' by Bazid Khan While Interviewing Babar Azam During India vs Pakistan Post Match Presentation Creates Uproar on Twitter

However, after this match, an old video of MS Dhoni resurfaced where he is seen talking about Pakistan potentially beating India in a World Cup game sometime in the future. The video is understood to be part of the post-match press conference at the 2016 T20 World Cup where Dhoni, the then Indian T20I captain, is heard saying this, "It is a reality that we would lose at some point of time. If it's not today, then it will be after 10, 20 or 50 years."Virat Kohli and Babar Azam’s Pics Go Viral As Captain's Embrace Each Other During India vs Pakistan T20 World Cup 2021 Fixture (See Photos)

Some words said by ms dhoni back in 2016 #INDvPAK #PakVsInd pic.twitter.com/UA0s2TSd32

Well, Dhoni had predicted it but he too might not have wanted it to happen this quick. India, thus had a very disappointing start to their T20 World Cup 2021 campaign and they would be keen on lifting each other up and getting ready for their second match against New Zealand, on October 31. Pakistan meanwhile, would face New Zealand on Tuesday, October 26.

(The above story first appeared on LatestLY on Oct 25, 2021 08:59 AM IST. For more news and updates on politics, world, sports, entertainment and lifestyle, log on to our website latestly.com).