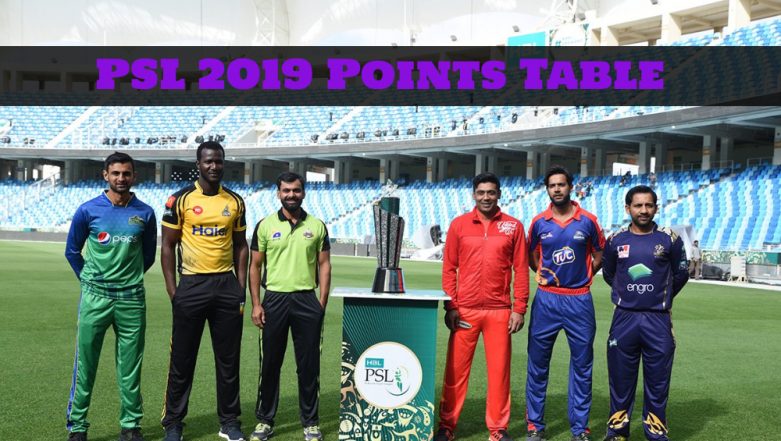 Peshawar Zalmi, Quetta Gladiators, Islamabad United and Karachi Kings emerge as the top four teams on the Pakistan Super League 2019 (PSL 2019) points table and have qualified for the playoffs. Multan Sultans and Lahore Qalandars fail to go past the first round. Peshawar and Quetta finished on number one and two spots respectively. If you are looking for the updated PSL 2019 points table along with net run rate then scroll down for it. PSL 2019 Schedule in PDF: Download Full Timetable With Fixtures, Team, Venue, Match Timings in IST and PKT of Pakistan Super League 4.

PSL 2019 will be held between February 14 to March 17. Islamabad United, Lahore Qalandars, Peshawar Zalmi, Karachi Kings, Quetta Gladiators, and Multan Sultans are the franchises taking part in the PSL 2019. Out of these six teams, only four will advance to PSL 2019 playoffs.

The format of PSL 2019 remains similar to previous seasons and other T20 leagues in the world like IPL and BPL. Teams will face each other in a double round-robin format, which means a team will play ten matches in the first round. Top four teams on the PSL 2019 points table will then progress to playoffs. Top two teams will face in a qualifier, and the winner will earn a direct into the final. The loser will then meet the winner of eliminator one between third and fourth placed teams in the second knockout match. PSL 2019 Live Streaming & Live Telecast on DSport, PTV Sports and Geo Super: Watch Free Telecast of Pakistan Super League T20 on TV and Online in India and Pakistan.

Two points will be awarded to the winner. In case of a tied match, the team which wins the Super Over will claim the two valuable points. If there is no result then the two teams will share a point each. At the end of the round-robin stage, if teams are tied on points then the side with better run-rate will march into the playoffs. PSL 2019 Teams Squad: Full Players List of All Pakistan Super League 4 T20 Franchises.

Islamabad United are the defending champions. The franchise has won two titles, most in PSL. After their title win in the inaugural edition, Islamabad United clinched the trophy is 2018 edition of PSL as well. The only team apart from them to win the PSL trophy is Peshawar Zalmi, they won the title in 2017 edition.