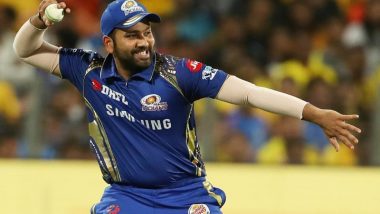 Mumbai Indian’s captain Rohit Sharma becomes the first Indian cricketer to throw the ceremonial first pitch for Seattle Mariners in United States of America for the Major League Baseball side.  The game is scheduled to happen at the Safeco Field around 1AM IST on Sunday. So the throw down ceremony is a pre-game event where the guest of honour is invited to throw out a first pitch.

Currently, Rohit Sharma and his wife Ritika are on a three-city US Tour and will be visiting San Francisco Bay Area, Seattle and Los Angeles. He will also participate in a series of cricket clinics and will also meet the fans. The right-handed batsman is dropped from India’s test squad which will play against Afghanistan on June 14, in Bengaluru.

However, Sharma is completely unperturbed about the exclusion. "Nothing changes for me. I don't want to change anything. I want to keep things simple. What has happened has happened. There is a right time for everything," he said to reporters. Sharma added that during his off time, he will be watching the 2018 FIFA World Cup, where he will support Spain. "I will watch some action for sure. No hesitation, my favourite team is Spain," said Rohit.

However, Sharma is a part of the squad which will travel to England next month. "The England tour will be important to get used to the conditions and get the right players (involved) moving forward (to the World Cup). I am sure the captain and coach will have an eye on the right combination," he said.

(The above story first appeared on LatestLY on Jun 02, 2018 10:32 PM IST. For more news and updates on politics, world, sports, entertainment and lifestyle, log on to our website latestly.com).