The Englishman continued from where he left in Qualifier 1 as he hit his fourth century of the season to help Rajasthan Royals enter the IPL final for the first time since 2008. For RCB, it was the end of a joyride that was fun while it lasted. 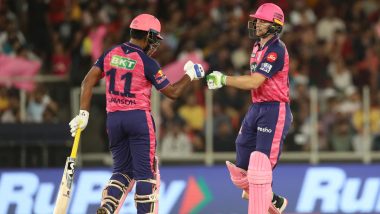 Shane Warne is smiling up there tonight. Fourteen years ago, he made them believe. Now, this dreamy bunch is on the cusp of recreating history and making him proud. Jos Buttler made it possible with a fourth hundred of the season after Prasidh Krishna and Obed McCoy set up the platform as Rajasthan Royals entered the final of IPL 2022 with a seven-wicket win over Royal Challengers Bangalore at the Narendra Modi Stadium on Friday, May 27. Jos Buttler Hits Fourth Hundred of IPL 2022 As RR Beat RCB to Qualify for Final

Buttler found his form just at the right time as he backed up his 89 from Qualifier 1 with an even impressive knock of 106* from 60 deliveries with 10 fours and six sixes. What was even better was his intent as he attacked right from the word go and never did anyone make him feel uncomfortable at the crease. He tore apart the RCB bowling and take them to all parts of the field to exert Rajasthan's dominance in the clash. The game was effectively over within the first 10 overs of Rajasthan's chase and it was made even worse when Buttler was dropped by Dinesh Karthik off the bowling of Harshal Patel.

The Englishman then did not give any other chance to RCB as he notched up his fourth ton in the tourney. RCB bowlers had an odd day on the field with everyone being taken to the cleaners. Only Josh Hazlewood's figures were impressive (2/23). Earlier, Rajat Patidar's 58 helped RCB post 157/8 on the back of another batting failure. Skipper Faf du Plessis (25), Virat Kohli (7) and Glenn Maxwell (24) failed to impress once again. Prasidh Krishna (3/22) and Obed McCoy (2/23) were at their best as they thwarted the flow of runs in the middle overs and even prevented a good finish by taking wickets consistently.

#Jos Buttler struck his fourth hundred of the season

All eyes are now set on the big final between Rajasthan Royals and Gujarat Titans on May 29. Gujarat have defeated Rajasthan twice already this season and would be aiming for a third win in front of their home crowd.

(The above story first appeared on LatestLY on May 28, 2022 12:03 AM IST. For more news and updates on politics, world, sports, entertainment and lifestyle, log on to our website latestly.com).