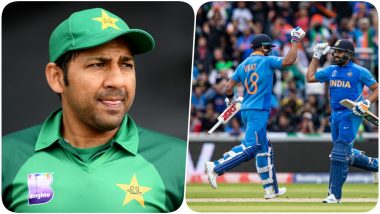 Former Pakistani captain Sarfaraz Khan has given his take on who between Virat Kohli and Rohit Sharma can be labelled as the best player in the world.. Ahmed chose the Indian captain and said that currently, Kohli is the number one player in the world. Virat Kohli and Rohit Sharma have always been compared not only by the cricketing pundits but also by the fans. Tho two players have been in the form of their lives and have aced in shattering milestones one after another. The two players have separate fan bases which have no age or demographic restrictions. Rohit Sharma Trolls Netizen Who Asked Him to Describe Virat Kohli in One Word (See Post).

Many players around the world have given a take on who between them can be labelled as the best in the world. The former Pakistani captain also gave his take and picked Kohli. In the interview, Ahmed explained the reason for choosing Virat and said that it is his success in the Test matches that makes him the number one player in the world. According to him, the Hitman has good timing but nobody can match Kohli.

" I have felt that although Rohit Sharma does not have that many runs in Test matches, the timing that he has is great. But the number one player in the world is definitely Virat Kohli. Nobody can match him, " said Ahmed. This is not the first time that there has been a comparison between the two players. Virat Kohli is also compared to Babar Azam, Brian Lara vs Sachin Tendulkar debate also is yet to be settled.

(The above story first appeared on LatestLY on Jun 18, 2020 10:59 PM IST. For more news and updates on politics, world, sports, entertainment and lifestyle, log on to our website latestly.com).