Pakistan will not only have to beat Bangladesh but thrash them by at least 316 runs to have any slim chances of finishing fourth in the points standings. Amidst such circumstances, skipper Sarafaraz Ahmed told the press that his team will aim to score 500 runs - something that has never been achieved in cricket's history. 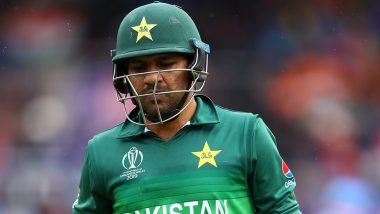 Pakistan's hopes of progressing to the semi-finals of ICC Cricket World Cup 2019 faded away following New Zealand's massive 119-run defeat against England. A New Zealand victory would have assured Pakistan a semi-final berth but Black Caps' defeat has left them on the brink of an early exit from CWC 2019. With things not falling their way, Pakistan will now have to thrash Bangladesh by at least 316 runs to have any slim chances of finishing fourth. Amidst such circumstances, skipper Sarafaraz Ahmed told the press that his team will aim to score 500 runs - something that has never been achieved in ODI cricket's history - giving fans another opportunity to troll the under pressure captain. Sarfaraz Ahmed Ahead of PAK vs BAN, CWC 2019 Tie Says, ‘We Will Try and Score 500 Runs’ (Watch Video)

" I would first say that we would want to win the match and if we are destined to win, something will surely happen and we will pull off a miraculous win. We will surely try and score 500 runs but the way the tournament has panned out until now, 280-300 looks a good total,” said Sarfaraz at the pre-match conference. But was soon trolled for his comments once the video went viral on social media.

#SarfarazAhmed - "Margin of Net-run-rate is quite high but we'll try to score 500 runs against Bang & put all our efforts to qualify for semifinal. If miracle is written in our destiny, it will definitely happen tomorrow." 🏏#PAKvBAN pic.twitter.com/7dLiFdqgga

Recall Back the Heroes

Sarfaraz Ahmedto Pakistan captain: We will still go to the semi finals

Pak Coach-How is it possible?

Bangladesh have already been knocked out of the tournament following their 28 runs loss to India, while Pakistan stands between the semi-finals and exit. Pakistan have won four matches and lost three, while Bangladesh have achieved the exact opposite in terms of victories and defeats. Pakistan are on fifth with seven points from eight games, while Bangladesh are seventh with seven points from eight matches.

(The above story first appeared on LatestLY on Jul 04, 2019 11:32 PM IST. For more news and updates on politics, world, sports, entertainment and lifestyle, log on to our website latestly.com).