Shahid Afridi Says 'I Don't Shy Away From Voicing My Opinion, Even if it Involves India' 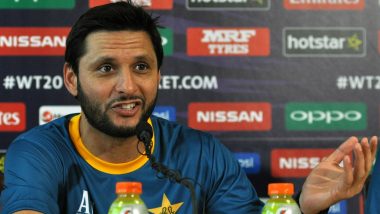 Karachi, Aug 1: Former Pakistan captain Shahid Afridi has been generally vocal regarding his views against India and time and again, he has been involved in war of words with former India opener Gautam Gambhir.

Afridi recently came under immense scrutiny for his views on Kashmir and at the time, Yuvraj Singh and Harbjahan Singh had said they don't want to have any kind of relationship with him anymore.

"One should always speak the truth, no matter what happens. I believe humanity is above everything else which is why I don't shy away from voicing my opinion, even if it involves India," Afridi was quoted as saying by Cricket Pakistan.

"Babar Azam is the backbone of Pakistan team and I don't think he feels the pressure of being constantly compared with Virat Kohli," he said. "I'm hopeful that Babar will start winning matches for Pakistan single-handedly, soon."

Azam, himself, had earlier said that he would rather be compared with batting greats from this own country rather than Kohli.

"I don't want to be compared with Virat Kohli. It would be better if people compare me with one of the Pakistani legends like Javed Miandad, Mohammad Yousuf or Younis Khan," Azam had told reporters last month during a videoconference.

(The above story first appeared on LatestLY on Aug 01, 2020 02:42 PM IST. For more news and updates on politics, world, sports, entertainment and lifestyle, log on to our website latestly.com).