Shaun Pollock Birthday Special: 7/87 vs Australia and Other Brilliant Performances by the Legendary South African All-Rounder 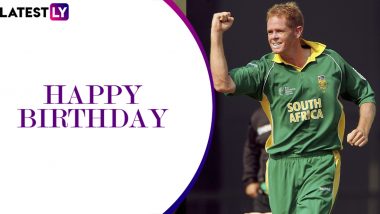 One of the best all-rounders to have played for South Africa, Shaun Pollock celebrates his 47th birthday on Thursday (July 16, 2020). Hailing from Port Elizabeth, Pollock wasn’t the quickest of the Proteas bowlers. However, his ability to swing the ball and accuracy made him a nightmare for the batsmen. Along with his prowess with the ball, Pollock was also a more than handy batsman lower down the order as he has played many match-defining knocks in his illustrious career. Below, we’ll revisit some of his best performances. Shaun Pollock Says Saliva Use Won’t Be a Problem in Bio-Secure Bubble.

Making his debut in 1995, Pollock didn’t take long in cementing his place in the side. His ability to take wickets consistently and knack of scoring quick runs lower down the order made him the mainstay of South African cricket team across all formats. Speaking of his numbers, Pollock has 421 and 393 wickets in 108 Test matches and 303 ODIs along with 3781 Test run and 3519 ODI runs. The talismanic all-rounder also handled the captaincy responsibility for a brief period of time and did reasonably well too. Meanwhile, let’s look at some memorable performances by the former Proteas all-rounder. Shaun Pollock Joins the Bandwagon of Trick Shot Videos.

7/87 Vs Australia In Adelaide

Batting first in the third Test of South Africa’s 1998 Tour of Australia, the Proteas side piled up 517 runs while batting first and the Adelaide track looked ideal for batting. However, that wasn’t the case when the Aussies came onto bat. The likes of Mark Waugh and Steve Waugh failed to tackle Pollock’s fiery deliveries as the Proteas pacer took seven wickets in the second innings. The home side, however, made a brilliant comeback with the bat in the last innings and the match ended in a draw.

The 1999 World Cup semi-final between Australia and South Africa might be remembered for Lance Klusener’s stellar cameo. However, it was Shaun Pollock who shone for the Proteas in the first innings. The right-arm pacer rattled Australia’s batting order and registered a magnificent five-wicket haul. As a result, the Men in Yellow were bundled out for just 213 runs. Unfortunately, Pollock’s effort went in vain as the match got tied and Aussies advanced to the finals on the virtue of finishing higher in the group stage.

5/23 Vs Pakistan In Johannesburg

Shaun Pollock breathed fire with the ball when South African took to Pakistan in the fifth ODI of 2007 series. Inzamam-ul-Haq won the toss and elected to bat. However, the decision proved to be an absolute disaster. Pollock ran through the opposition’s batting order as Pakistan never looked in the contest. As a result, the visitors were packed for 153 and South Africa comfortably won the game by nine wickets.

111 Vs Sri Lanka In Centurion

South Africa were tottering at 185/6 when Pollock came into bat in the third match of 2001 Test series between India and Sri Lanka. The likes of Herschelle Gibbs and Jacques Kallis were back in the hut and the Lankan lions were well placed on the driver’s seat. However, Pollock went after the bowlers from the outset and played a gem of a knock. The right-handed batsman scored fours and sixes for fun and brought up a brilliant century. Riding on his efforts, Proteas posted 378 while batting first and went on to win the game by an innings and seven runs.

130 Vs Asia XI In Bengaluru

Africa XI’s loss looked inevitable in the first match of Afro-Asia Cup 2007 as they were reduced to 5/31 while chasing 318. However, Pollock wasn’t ready to put his guards down as he made a brilliant fight back. Fours and Sixes were raining at the M Chinnaswamy Stadium as the likes of Mohammad Asif and Zaheer Khan were taken to cleaners. Soon, Pollock brought up his maiden ODI hundred. His efforts, however, went in vain as Asia XI won the game by 34 runs.

(The above story first appeared on LatestLY on Jul 16, 2020 08:00 AM IST. For more news and updates on politics, world, sports, entertainment and lifestyle, log on to our website latestly.com).