Australia skipper Pat Cummins on Thursday hinted that Glenn Maxwell might feature in the playing eleven for the second Test against Sri Lanka in Galle, starting from Friday, at number eight as an off-spin all-rounder. 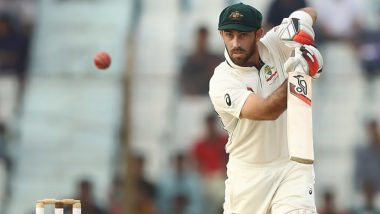 Colombo, July 7: Australia skipper Pat Cummins on Thursday hinted that Glenn Maxwell might feature in the playing eleven for the second Test against Sri Lanka in Galle, starting from Friday, at number eight as an off-spin all-rounder. Cummins added that Maxwell's inclusion, most likely in place of left-arm pacer Mitchell Starc, will depend on the pitch will be on the morning of the Test. Going into the second and final Test with a 1-0 lead, Australia have stuck with the same 12-man squad that they had announced on eve of the first Test, which they won by ten wickets. Sri Lanka Cricket Affirms Its Readiness To Host Asia Cup 2022: Report.

If Maxwell plays on Friday, he will be playing a first-class match for the first time since 2019 apart from a comeback in the Test arena in 2017. It would also mean that Cummins, with some support from Cameron Green, will be Australia's pace option for the second Test. "He (Maxwell) was excellent. With the all-round package that he brings in, particularly that bowling, you feel like you can easily get 15-20 overs out of him. It's a pretty different kind of first-class cricket here to what you might experience playing Sheffield Shield."

"Different pace, wickets are so different. The role that we'll see him in is a little bit of bowling and a bit of batting at No.8 and taking the game on. It might not be grinding out a hundred but a quickfire 30 or 40," said Cummins ahead of the second Test. With the spin trio of Nathan Lyon, Mitchell Swepson and Travis Head taking all ten wickets in Sri Lanka's sensational collapse to 113 all out in the second innings, it means that there is the very little role to play for fast bowlers, as seen by Cummins not bowling in the second innings, the first time it happened in his Test career. But the pace spearhead insisted that players knew how their roles would be in Sri Lanka. Steve Smith Intrigued by England’s ‘BazBall’ Approach, Asks ‘How Long Can It Last?’

"It's purely conditions-based. They know their quality. I think you have to bowl a bit differently to wherever you are playing. England is vastly different from even Australia at times. Another world away from somewhere like here but I think you've seen the way Starcy is taking his game to the next level." "He's being a bit different, developing new balls, whether it's the wobble seam as opposed to trying to swing it. Settling into a groove where he can play a holding role. So I'd just say he's a more well-rounded bowler to wherever the conditions are for that game. Mitch Starc was the leading wicket-taker here last time. We have another day. We'll take a look. But they're great team players. They know their worth to the team."

(The above story first appeared on LatestLY on Jul 07, 2022 03:27 PM IST. For more news and updates on politics, world, sports, entertainment and lifestyle, log on to our website latestly.com).