Shafali Verma and Laura Wolvaardt were on song for Velocity as their half-centuries helped their side get a win in 18.2 overs. Velocity next take on Trailblazers on May 26. 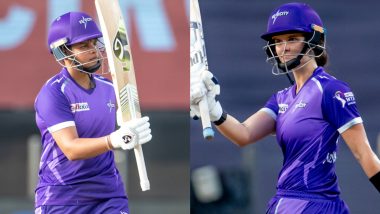 Velocity turned up the heat in some style as they defeated Supernovas by seven wickets at the Women's T20 Challenge on Tuesday, May 23. Chasing a total of 151, Shafali Verma and Laura Wolvaardt struck fifties as Velocity completed the chase in 18.2 overs. With this, Supernovas finished their group game with one win and one defeat. Harmanpreet Kaur's side had defeated Trailblazers a day ago.  Supernovas ended up struggling at 18/3 at one stage and it was left to skipper Kaur to resurrect their innings. Kaur and Taniya Bhatia stitched a fourth-wicket stand of 82 runs that helped breathe some life back into the Supernovas' innings. Shafali Verma, Laura Wolvaardt Help Velocity Beat Supernovas by Seven Wickets at Women’s T20 Challenge 2022

Kaur scored a scintillating 71 off 51 deliveries with three sixes and seven fours to help Supernovas get to 150/5. Kate Cross starred with the ball for Velocity with figures of 2/24 in her four overs. Radha Yadav and Deepti Sharma took one apiece.

Velocity had the perfect start in their chase with Varma going all guns blazing from the start. She scored the fastest fifty in the competition, which came off 30 deliveries. Her innings was undone by a sensational catch from Kaur at point. After her departure, it was Laura Wolvaardt and skipper Deepti Sharma who put together 71 runs, which led them to a win.

#Harmanpreet Kaur registered his highest personal score in the competition-71

#She also became the highest run-getter in the competition.

#They also pulled the highest successful chase in the competition's history

The next game of the Women's T20 Challenge would be played between Trailblazers and Velocity before the final on May 28.

(The above story first appeared on LatestLY on May 24, 2022 08:41 PM IST. For more news and updates on politics, world, sports, entertainment and lifestyle, log on to our website latestly.com).