The BCCI President Sourav Ganguly has been hospitalised after being tested positive for COVID-19. Now, Snehashish Ganguly spilled the beans on his health and explained that the BCCI President has been admitted to Woodland hospital as a part of a precautionary measure as the doctors didn't want to take any chance regarding his health. 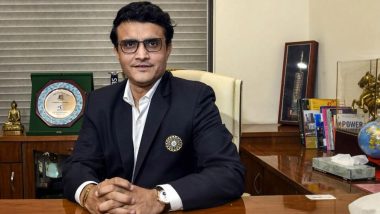 Prior to this, Ganguly underwent angioplasty a couple of times. Many famous personalities including Mamta Banerjee had visited the BCCI President  Ganguly was hospitalized way back in January due to a heart attack in January. Speaking to Indian Express, Snehashish said, "Sourav is stable. He underwent angioplasty earlier this year. So as a precautionary measure he has been admitted to Woodlands."

Talking about the outburst of COVID-19, the number of cases have been on the rise in India. the country has reported 6,358 new cases and 6,450 recoveries over the last 24 hours. Omicron variant continues to be the cause of worry as the number of cases have also been going with each passing day. The latest figures suggesting 653 confirmed cases of the Omicron variant. There are currently more than 70,000 active cases in India and the recovery rate is 98.40 per cent.

(The above story first appeared on LatestLY on Dec 28, 2021 03:31 PM IST. For more news and updates on politics, world, sports, entertainment and lifestyle, log on to our website latestly.com).