M.S Dhoni's return to captaining Chennai Super Kings in IPL 2022 started on a winning note as a mammoth 182-run opening partnership between Ruturaj Gaikwad (99 off 57 balls) and Devon Conway (85 not out off 55 balls) set up the 13-run win of the defending champions over Sunrisers Hyderabad at MCA Stadium on Sunday. 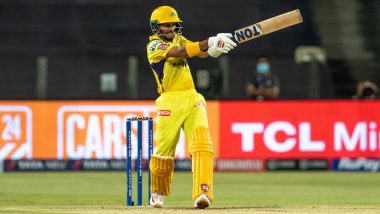 Pune, May 1: M.S Dhoni's return to captaining Chennai Super Kings in IPL 2022 started on a winning note as a mammoth 182-run opening partnership between Ruturaj Gaikwad (99 off 57 balls) and Devon Conway (85 not out off 55 balls) set up the 13-run win of the defending champions over Sunrisers Hyderabad at MCA Stadium on Sunday. With just the third win of the current season, Chennai have managed to keep their slim hopes of making the playoffs alive. A chase of 203 was always going to be a tall order for Hyderabad, who made 46 runs in the first four overs. SRH vs CSK Stat Highlights, IPL 2022: Ruturaj Gaikwad Shines As Chennai Beat Hyderabad.

But they couldn't get the big scores at the top which Chennai got, eventually ending at 189/6 in 20 overs with Nicholas Pooran top-scoring with an unbeaten 64. For Chennai, left-arm pacer Mukesh Choudhary took 4/46 while left-arm spinner Mitchell Santner and pacer Dwaine Pretorius took a wicket each. Abhishek Sharma gave Hyderabad a fast start, making 39 runs off 24 balls, with some boundaries coming off edges and earning a reprieve at 20 when Choudhary dropped a sitter at mid-off. His luck finally ran out when Choudhary had him caught at long-on off a pull, ending the 58-run opening partnership with Kane Williamson.

On the very next ball, Chaudhary cramped Rahul Tripathi for room and the attempted upper-cut went straight to short third man. Aiden Markram dispatched Mitchell Santner for back-to-back sixes over long-on but the left-arm spinner had the last laugh, forcing the right-handed better to miscue straight to deep mid-wicket. Amidst all this, Williamson continued to play the anchor of the innings, with a one-handed six coming off the bottom hand going flat over wide-long on against Maheesh Theekshana being the standout shot. But in a bid to accelerate, Williamson was trapped plumb lbw by a slower ball from Dwaine Pretorius, falling for 47 off 37 balls. Chennai Super Kings Inflict Second Consecutive Defeat On Sunrisers Hyderabad in IPL 2022.

Despite some fiery sixes by Nicholas Pooran, including a switch hit off Theekshana, the asking rate had gone beyond Hyderabad's reach. Choudhary returned in the 18th over to take out Shashank Singh with a thin edge behind to Dhoni and closed the over with Washington Sundar scooping to his stumps. Pooran slammed two fours off Pretorius and was even dropped on 29 by Santner in the 19th over. He went on to smash Choudhary for a six over cow corner and got his fifty in 29 balls with a slice over backward point. Pooran smacked consecutive sixes over backward square leg and backward point to take 24 runs off the final over. But that couldn't prevent Chennai from picking their third win of the tournament.

(The above story first appeared on LatestLY on May 02, 2022 10:19 AM IST. For more news and updates on politics, world, sports, entertainment and lifestyle, log on to our website latestly.com).