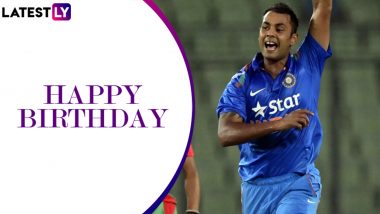 Stuart Binny was once regarded to fill the all-rounder’s void in the Indian cricket team. The all-rounder, however, in limited opportunities could not seal his spot in the team. Stuart, who is son of former Indian player Roger Binny, was also part of the Indian squad for the 2015 Cricket World Cup, though he didn’t get to play a single game. Stuart was born June 03, 1984, in Bengaluru, Karnataka. As the all-rounder turns 36, we take a look at his most memorable performance which came against Bangladesh in a One-Day International (ODI). Mayanti Langer Shuts Down Troll Asking About Stuart Binny.

In 2014, under Suresh Raina, Indian team toured Bangladesh and picked players to test the bench strength. Stuart was one of the members in the low profile series. However, the second ODI at the Shere Bangla National Stadium in Mirpur, Dhaka turned out to be allow scoring thriller.

In response to India’s paltry 105, Bangladesh got off to a poor start with pacer Mohit Sharma removing both the openers for just 13 runs on board. Mohammad Mithun and captain Mushfiqur Rahim then took Bangladesh forward in the small chase. The hosts needed 62 more runs to win with eight wickets in hand when Stuart in his second over dismissed Mushfiqur.

The dismissal opened the gates for India as Stuart went on to run through the Bangladesh batting order and ended up claiming six wickets for just four runs in 4.4 overs. Bangladesh were dismissed for just 58 runs. Stuart’s spell included two maidens as well in which he bettered Anil Kumble’s 6/12 record to register best bowling figures by an Indian bowler in ODIs.

Stuart has represented India in six Tests, 14 ODIs and three T20Is. He last played for India in a T20I against West Indies at Lauderhill in 2016. Stuart was one of the players who participated in the rebel Indian Cricket League (ICL). In Indian Premier League, Stuart has been part of Mumbai Indians, Rajasthan Royals and Royal Challengers Bangalore.

(The above story first appeared on LatestLY on Jun 03, 2020 08:30 AM IST. For more news and updates on politics, world, sports, entertainment and lifestyle, log on to our website latestly.com).