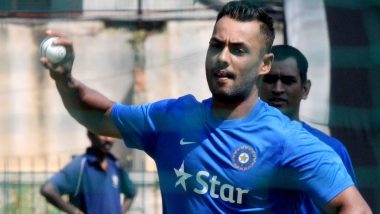 New Delhi, February 6: All rounder Stuart Binny and his wife and sports presenter Mayanti Langer have often been the victims of troll attacks on the Internet. While Binny has been inactive on social media for a few years now, Langer is known to not hesitate to talk back whenever a negative comment comes her way.

The same happened recently when she posted an image from the studio on Instagram. In the comments, a user wrote "Where is Stuart Binny nowadays?" to which another replied, "He is helping her in carrying her baggage."

Langer replied saying: "I can carry my own baggage thank you very much. he's busy living his life, playing cricket, just being awesome in general, and not passing comments on people he doesn't know."

While Langer is currently part of the Indian broadcast team for the national team's tour of New Zealand, Binny is playing in the Ranji Trophy for Nagaland.

(The above story first appeared on LatestLY on Feb 06, 2020 11:10 PM IST. For more news and updates on politics, world, sports, entertainment and lifestyle, log on to our website latestly.com).