Manimaran Siddharth was the star with the ball in hand for Tamil Nadu and took 4/20 to help his side restrict Baroda to a low total after asking them to bat first. Hari Nishanth then top-scored with the bat while Karthik (22 off 15) and Shahrukh Khan (18 from 7) played important cameos to lead Tamil Nadu to victory. 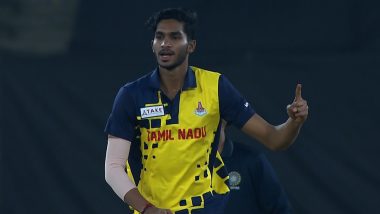 Tamil Nadu beat Baroda by seven wickets in the final to win the Syed Mushtaq Ali Trophy 2021 title. The Dinesh Karthik-led side chased down a 121-run target with two overs to spare to clinch their second Syed Mushtaq Ali title and first since the inaugural edition in 2006/07 when they beat Punjab. Manimaran Siddharth was the star with the ball in hand for Tamil Nadu and took 4/20 to help his side restrict Baroda to a low total. Hari Nishanth then top-scored with the bat while Karthik (22 off 15) and Shahrukh Khan (18 from 7) played important cameos to lead Tamil Nadu to victory. Virat Kohli, Ravi Shastri, Sourav Ganguly Express Gratitude and Thank PM Narendra Modi for ‘Kind Words’ on Mann Ki Baat.

Earlier, opting to bowl first, Tamil Nadu restricted Baroda to 120/9 with their spinners running through the Baroda batting order. Manimaran Siddharth, playing his first match in the tournament, spun a web around the Baroda batsmen and took 4/20 in his four-over spell.

Baba Aparajith, Sonu Yadav and M Mohammed picked the other three wickets while there also two run-outs in the Baroda innings. Vishnu Solanki was top scorer for Baroda with his 55-ball 49 runs knock powering baroda to a respectable score. His 58-run stand with Atit Sheth helped Baroda reach closer to the 100-run mark after slumping to 36/6 in the ninth over.

Of the first seven Baroda wickets that fell, Siddharth took four. Baroda found it hard to read his varieties and looked well short of even crossing three figures at one stage before Solanki and Sheth (29) combined to at least take them close to 100 runs. Solanki then shared another 26 with Bhargav Bhatt (12) before being run-out trying to steal a two in the penultimate delivery.

Baroda, who were without some of their senior players and captain Krunal Pandya, did well to reach the final but succumbed to pressure in the summit clash after finding it hard to score against spinners on a turning track. They lost their opening wicket to Aparajith in the second over. Siddharth was then introduced in the fourth over and he picked Baroda captain Kedar Devdhar in his first over. He went to pick at least one wicket in his first three overs and took two in his third.

(The above story first appeared on LatestLY on Jan 31, 2021 10:31 PM IST. For more news and updates on politics, world, sports, entertainment and lifestyle, log on to our website latestly.com).