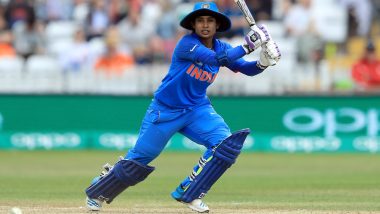 Indian women team captain Mithali Raj is regarded as one of the batswomen to have graced the game and her numbers speak volumes of his prowess. The veteran cricketer has made and broken many prominent records in her illustrious career. One of her prestigious feats came on exact this day (July 12) in 2017. During the India vs Australia clash in ICC Women's World Cup 2017, Raj scripted history and became the highest run-scorer in women’s ODIs. She surpassed England’s Charlotte Edwards to get the feat. In fact, in the same match, she also became the first women to score 6000 runs in ODI cricket. Mithali Raj Sets Her Eyes on ICC Women’s Cricket World Cup 2021, Says ‘Will Give It a Best Shot.’

The Indian captain stepped into the game with 5,959 runs from 182 ODIs. By scoring her 34th run, the talismanic cricketer went past Edwards (5,992) and got the milestone. As Raj’s historic feat completed three years, International Cricket Council (ICC) relived the game and shared the video of the moment when Mithali got the feat. The whole Bristol stadium celebrated the milestone by lauding the legendary cricketer. Have a look. BCCI Should Not 'Wait Forever' to Organise Women's IPL by 2021, Says Mithali Raj.

#OnThisDay in the 2017 Women's @cricketworldcup, @M_Raj03 became the leading run-scorer in women's ODIs with this history-making single 👑 pic.twitter.com/Gd7CR86JPs

Mithali played a brilliant knock of 69 runs in the match as India piled up 226/7 while batting first. However, Aussie skipper Meg Lanning and Ellyse Perry scored half-centuries and guided their side to a comfortable eight-wicket victory.

Speaking of Mithali Raj’s prolific career, the Jodhpur-born cricketer made her ODI debut back in 1999 and ever since has been the mainstay of India’s batting line-up. So far, the right-handed batswoman has scored 6888 runs from 209 matches with an astonishing average of 50.64. Well, the star cricketer might be in the twilight of her career. However, she still determines to win the ICC Women’s World Cup which is scheduled to be played in 2021.

(The above story first appeared on LatestLY on Jul 12, 2020 12:05 PM IST. For more news and updates on politics, world, sports, entertainment and lifestyle, log on to our website latestly.com).