Virat Kohli vs Ish Sodhi, Martin Guptill vs Jasprit Bumrah and Other Exciting Mini Battles to Watch Out for During India vs New Zealand 1st T20I 2020 in Auckland 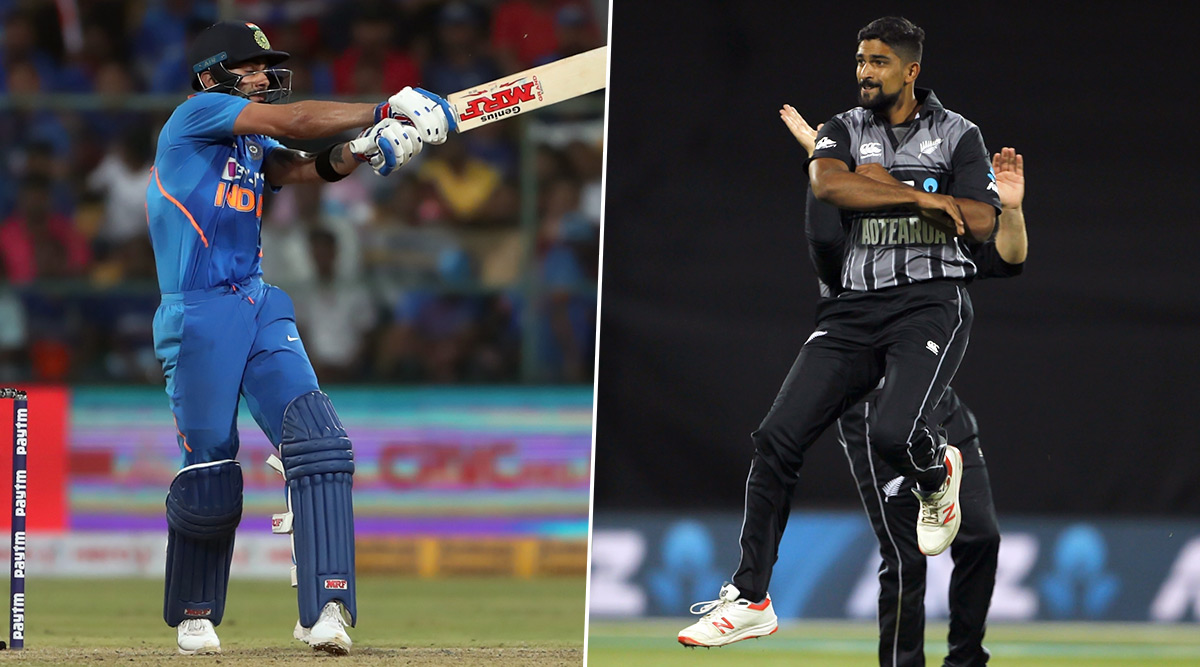 India will hope to carry their splendid home summer in New Zealand while the Black Caps will hope end their home run with a series win against India – a team they have dominated in T20I over the years. India and New Zealand will face each other in a five-match T20I series, starting January 24, 2020 (Friday). India vs New Zealand 1st T20I match will be played in Auckland. The five-match T20I series will be important for both teams in their preparation as the countdown for World T20 begins and this series is bound to throw up some key mini-battles between players of both teams. How Kane Williamson uses leg-spinner Ish Sodhi against Virat Kohli will be interesting especially after the latter’s vulnerability against Australia’s Adam Zampa. There will be several other mini-battles to watch out for as two teams, with some of the best T20I players in their ranks, face each other. India vs New Zealand 2020 Schedule, Free PDF Download: Get Fixtures, Time Table With Match Timings in IST.

New Zealand endured another super over heartbreak to England, this time in a T20I match, in their last T20I match at home. They squandered the five-match T20I series too with that 9-run super over defeat with the series tied 2-2. Surprisingly, the Blacks Caps despite their dominance over India in the shortest format of the game suffered a defeat in the only T20I match at Auckland. New Zealand hold an 8-3 advantage in head-to-head records against Virat Kohli’s men and will hope to further extend the T20I dominance with a series win. IND vs NZ Head-to-Head Record: Ahead of 1st T20I 2020, Here Are Match Results of Last Five India vs New Zealand Twenty20 Matches.

Both teams head into the five-match T20I series depleted by injuries but India have the luxury of a more prominent and experienced bench compared to the hosts. India will be without the likes of Shikhar Dhawan, Hardik Pandya and Deepak Chahar while New Zealand’s injury list is longer. They are missing fast bowlers Trent Boult, Lockie Ferguson, Matt Henry and wicket-keeper Tom Latham. Take a look at some the mini-battles to watch out for in India vs New Zealand 1st T20I match.

Ish Sodhi has dismissed Virat Kohli and Rohit Sharma once each and although his T20I record against India – 11 wickets in 7 matches – is good enough – against Virat Kohli the record is negligible. Yet he is in the reckoning because some other wrist spinner from other nation troubled Kohli. Adam Zampa dismissed Kohli twice in three innings bringing Kohli’s weakness against leg-spinners back into focus. Don’t be surprised if Williamson throws Sodhi at Kohli and tries to exploit the latter early into his innings.

Guptill has always been vulnerable against pace at the start of his innings and who else other than Bumrah to exploit it. Initially a death bowler, Bumrah has slowly turned effective in all facets of an innings. Expect Bumrah to bounce, york and test Guptill with deliveries away from his body.

Rohit Sharma has always been unguarded against deliveries outside the off-stump and Tim Southee is an experienced exponent of that delivery. If New Zealand manages to stop Rohit finding boundaries early into the game, Southee can throw a barrage of this type of deliveries at the hitman.

India has won only 3 times in 11 T20I matches against New Zealand and are still chasing their maiden T20I series win in New Zealand. Virat Kohli can become the first Indian captain to win a Twenty20 International series in New Zealand if India manages to overcome a depleted Black Caps side in the five-match T20I series.