Virat Kohli’s Records As ODI Captain: Take a Look at Some Facts and Figures of the Indian ODI Side Under the 33-Year Old’s Leadership

Rohit Sharma is set to take over as India's ODI captain from the series against South Africa after the BCCI replaced Virat Kohli with him. Indian cricket is all set for a new chapter in its ODI cricket but let us take a look at how the country fared under Kohli as the captain. 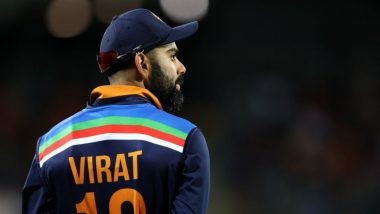 Virat Kohli's removal as India's ODI captain came as a surprise to many but to some, it was an expected development. The 33-year-old, citing workload management had voluntarily relinquished T20I captaincy this September and stated that the subsequent T20 World Cup in the UAE would be his last. Although it was not the ending he would have wanted, many would have expected him to remain skipper of the ODI outfit. But several reports from the past few days suggested that Rohit Sharma was been considered to be Kohli's replacement and all of it came true when the BCCI dropped a one-liner in a tweet stating, "The All-India Senior Selection Committee also decided to name Mr Rohit Sharma as the Captain of the ODI & T20I teams going forward." Rohit Sharma Becomes India’s New ODI Captain: Netizens React to Virat Kohli Being Replaced As 50-Over Skipper for Men in Blue (See Posts)

Despite Kohli not remaining captain of India's limited-overs sides, it can be expected that he regains his touch as a batsman and once again scores runs for fun, something he used to do so frequently in his early years while playing cricket for India. Kohli had taken over leadership of India's limited-overs teams from MS Dhoni in 2017 and he led the side for five years. Let us take a look at some of his records in ODIs as a skipper: India Test Squad for South Africa Tour Announced: Rohit Sharma Returns, Named Virat Kohli’s Deputy for Three-Match Series

Statistically, Kohli's win percentage as captain in ODIs (70.43%) is more than greats like Kapil Dev and MS Dhoni, both of whom had won the World Cup in the years 1983 and 2011 respectively.

India played a total of 19 bilateral series under Kohli out which they won 15. Under Kohli, India secured ODI series wins in South Africa, New Zealand and Australia. In ICC tournaments, he took India to the knockouts thrice (Asia Cup 2013-14, 2017 Champions Trophy and 2019 World Cup) but failed to win the title. His last series as ODI captain was against England at home which India won 2-1.

As a batsman, he was right on top with the best. He scored a total of 5,449 runs as ODI captain at a stunning average of 72.65 with 21 hundreds. Only Ricky Ponting has more hundreds as captain (22).

He might have had a successful white-ball captaincy career in terms of impact but there's no denying the fact that his inability to win a major ICC trophy would always remain a blot. Nonetheless, cricket fans would still be able to see captain Kohli in Test cricket, a format in which he is one of the best leaders in world cricket. Meanwhile, Rohit Sharma would be expected to lead India to potentially the 2022 T20 World Cup and the 2023 World Cup.

(The above story first appeared on LatestLY on Dec 09, 2021 12:16 AM IST. For more news and updates on politics, world, sports, entertainment and lifestyle, log on to our website latestly.com).