Virender Sehwag’s IPL career went underway with Delhi in the inaugural 2008 season. The opener didn’t take long in making a mark as he set the tournament on fire with his staggering batting, playing a crucial role in guiding his side to the playoffs. There was no looking back for the dasher after that as he continued to showcase his blitzes in Delhi jersey till 2013. 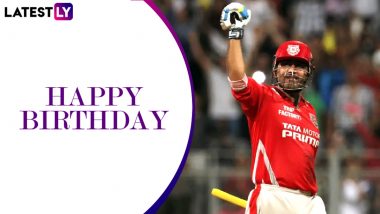 One of the most destructive openers, if not the most destructive, to have ever stepped onto the cricket field, Virender Sehwag turns 42 on Tuesday (October 20) and birthday wishes are pouring in for him from all around the world. Hailed as the Nawab of Najafgarh, the former Indian batsman redefined the role of batsmen with his fearless and aggressive approach. Be it Test or T20, Delhi or Durban, Sehwag went after the bowlers from the word go and played numerous jaw-dropping knocks in his illustrious career. The talismanic cricketer also proved his mettle in the Indian Premier League where he represented Delhi Daredevils (now Delhi Capitals) and Kings XI Punjab. Virender Sehwag, Irfan Pathan, Harbhajan Singh and Others Recall India’s 2007 T20 World Cup Triumph.

Sehwag’s IPL career went underway with Delhi in the inaugural 2008 season. The opener didn’t take long in making a mark as he set the tournament on fire with his staggering batting, playing a crucial role in guiding his side to the playoffs. There was no looking back for the dasher after that as he continued to showcase his blitzes in Delhi jersey till 2013. KXIP bagged Sehwag’s services in the 2014 season the veteran didn’t disappoint. He scored 455 runs in the season as Punjab qualified for their first-ever finals. In total, the swashbuckler scored 2728 runs in 104 IPL games with a spectacular strike rate of 155.44. On the occasion of Sehwag’s 42nd birthday, let’s revisit some of his best IPL knocks. Virender Sehwag Extends Helping Hand to Migrant Workers, Prepares Meals Alongside Family.

The Hyderabad track seemed to favour bowlers as Deccan Chargers were restricted to 142/8. However, that wasn’t the case when Delhi came onto bat. Despite losing opening partner Gautam Gambhir early, Sehwag backed his instincts and scored runs all over the park. Fours and sixes were raining in the stadium as Sehwag remained unbeaten on 94 off mere 41 deliveries. As a result, DD won the game by nine wickets with seven overs to spare.

Deccan Chargers bowlers again became victims of Sehwag’s mayhem in the 2011 season. Chasing 176 in Hyderabad, Delhi’s batting line-up collapsed with four of top-five batsmen getting out on single digits. Just when Deccan’s victory looked inevitable, the Delhi skipper opened up his arms and made a mockery of the opposition bowlers. Sehwag notched up his maiden IPL century as Delhi won the game by four wickets.

Facing the likes of Harbhajan Singh and Lasith Malinga, Sehwag went absolutely berserk at the Arun Jaitley Stadium in Delhi. Chasing 162, Sehwag didn’t take long in making an impact as Mumbai never even looked in the contest. While Mahela Jayawardene was playing steadily at one end, the dasher toiled MI bowlers to every part of the ground. He remained unbeaten on 95 off 57 balls as DD comfortably won the contest by nine wickets.

Stakes were very high as Kings XI Punjab met Chennai Super Kings in the second Qualifier on IPL 2014. CSK skipper MS Dhoni elected to field first after winning the toss, but the decision didn’t prove to be impeccable. Sehwag was at the top of his A-game as the Mumbai crowd witnessed a batting exhibition. From Ashish Nehra to Ravichandran Ashwin, every bowler was taken to cleaners as Sehwag registered his second IPL century. Riding on his efforts, KXIP posted 226/6 and eventually won the game by 24 runs.

The dashing batsman bid farewell to the game in 2015 and gave a breather to bowlers all around the world. Sehwag, however, continued to entertain his fans with his hilarious remarks on commentary box and social media. The legendary Indian batsman has also been IPL 2020 extensively, continuously giving his opinions on players and teams’ performances.

(The above story first appeared on LatestLY on Oct 20, 2020 08:00 AM IST. For more news and updates on politics, world, sports, entertainment and lifestyle, log on to our website latestly.com).