WI vs BAN Preview: Likely Playing XIs, Key Battles, Head to Head and Other Things You Need To Know About T20 World Cup 2021 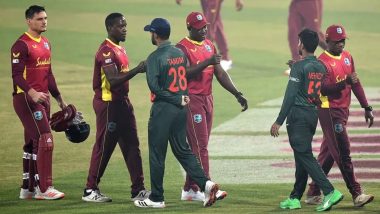 West Indies and Bangladesh are will be facing each other in the T20 World Cup 2021. This is a do-or-die game for both teams as they will have to win a game for qualifying in the semi-finals of the T20 World Cup 2021. In this video, we shall be talking about the likely playing XI, key battles and head-to-head records of the game. But before that, let’s have a look at the team’s previous performances. West Indies had lost the game against England as they got skittled out for 55 runs. ICC T20 World Cup 2021 Points Table.

Also, they lost against South Africa by eight wickets. Bangladesh on the other hand also lost a couple of games. One against Sri Lanka by five wickets and that too with seven balls to spare. The other game played by Bangladesh was against England which they lost comprehensively by eight wickets. So it's important for both teams to win this encounter. Now, here's the preview of the game below.

When it comes to Head-to-Head records, West Indies and Bangladesh played against each other 12 times. Six matches are won by West Indies and five by Bangladesh. The remaining one game ended the match getting abandoned.

Chris Gayle and Darren Bravo would be the most important players for West Indies whereas Liton Das and Mahmudullah would be the key performers for Bangladesh in this Group 1 match.

The battle between Chris Gayle and Shakib Al Hasan would be a very interesting one to watch. Also, the duel between Darren Bravo and Mustafizur Rahman can turn out to be a riveting one.

The WI vs BAN clash will be played at the Sharjah Cricket Stadium on October 29, 2021 (Friday). The AUS vs SL encounter has a start time of 03:30 pm IST (Indian Standard Time) with toss taking place at 07:00 pm.

Fans can live telecast the West Indies vs Bangladesh match live on Star Sports channels. The AUS vs SL match in T20 World Cup 2121 live telecast will be available on Star Sports channels in English and well as regional commentary languages. Fans looking for how to watch the WI vs BAN live streaming online can watch the match live on the Disney+Hotstar app as well as on the website. Fans watching the live streaming online on Disney+ Hotstar will have to pay a nominal fee and subscribe to catch the live-action.

(The above story first appeared on LatestLY on Oct 28, 2021 09:41 PM IST. For more news and updates on politics, world, sports, entertainment and lifestyle, log on to our website latestly.com).