With 'Every Base Covered', Michael Vaughan Picks England As World T20 Favourites

England are currently playing a three-match T20I series against Pakistan which they levelled by winning the second match by 45 runs on Sunday. After this series, England's World Cup squad is likely to be announced. 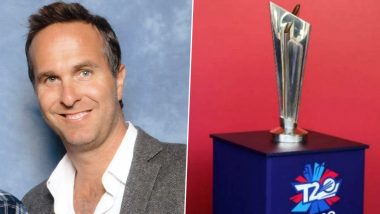 Former cricketer Michael Vaughan reckons that England are favourites to win the World T20, which starts in October 2021. England, playing without most of their first-team players, inflicted a 45-run defeat on Pakistan in their second T20I of the series to level things up at 1-1 after losing the first match. Vaughan, while commenting on the match, said, "England have put themselves in a great position because they've got absolutely everything covered." England had won the 50-over World Cup two years ago. In the last T20 World Cup in 2016, they had lost the finals to West Indies after Carlos Braithwaite hit four huge sixes in the last over off Ben Stokes' bowling. England vs Pakistan 2021, 2nd T20I Match Result: Jos Buttler, Saqib Mahmood Shine as Hosts Defeat Visitors in Second Game

The team management opted to rest captain Eoin Morgan from a side which already lacked big names like Jofra Archer, Ben Stokes and Sam Curran among others for the second T20. Jos Buttler led the team in Morgan's absence and he led from the front with a 39-ball 59-run innings, He was ably supported by Moeen Ali (36 off 13) and Liam Livingstone (38 off 23 balls) as England amassed 200 runs in their first innings. Pakistan in response, started off brightly with skipper Babar Azam (22) and Mohammad Rizwan (37) sharing a 50-run opening stand. Once Azam fell in the powerplay, the entire batting order crumbled and failing to take pressure, they were eventually restricted to 155/9 in their chase, despite some late fireworks from Shadab Khan. The third and deciding T20 of the series is on Tuesday at the Old Trafford.

In the first T20I, England had reasons to be happy despite the loss with Liam Livingstone smashing a 42-ball hundred and on Sunday, he cracked two huge sixes. One of them clear the stand and potentially fell onto the rugby ground nearby. Vaughan, while talking about Livingstone, said, "He's becoming a class act. The hundred he got on Friday will have given him a huge amount of confidence and he was well on his way again today before he was run out. He's one we're going to see a lot of over the next few years."

(The above story first appeared on LatestLY on Jul 19, 2021 05:07 PM IST. For more news and updates on politics, world, sports, entertainment and lifestyle, log on to our website latestly.com).