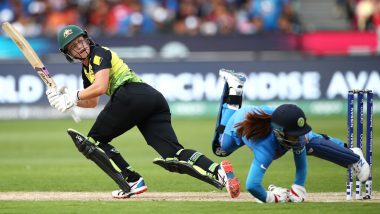 Australia wicketkeeper-batsman Alyssa Healy reacted sharply to BCCI president Sourav Ganguly’s announcement that the women's IPL 2020 or women’s T20 Challenge will be played during the men’s Indian Premier League in UAE later this year. Ganguly announced that this year’s women’s IPL will be fit into the men’s IPL schedule. The men’s IPL will be played from September 19 to November 8 and sources suggested that the women’s IPL could be played towards the end of the tournament with November 1-10 reported dates for hosting the women’s IPL. Women’s IPL 2020: BCCI President Sourav Ganguly Announce Women’s T20 Challenge to Be Played During Indian Premier League 13 in UAE.

If it goes as per the suggested dates, then the women’s IPL could clash with the women’s Big Bash League which is scheduled to be held from October 17 to November 29 in Australia. Healy, who guided Australia to the ICC Women’s T20 World Cup win last year with a match-winning innings against India, reacted sharply to the announcement and said that both tournaments clashing will only make things worse for the development and progress of women’s cricket.

“So during the WBBL.... cool,” Healy tweeted quoting author and journalist Boria Majumdar’s post about the women’s IPL. She also raised questions about the availability of the Indian women’s players who signed up for this year’s WBBL. As per an Espncricinfo report, at least three Indian women’s cricketers were are to play in the WBBL this season once they are cleared by the BCCI.

Agree. If true, it’s a shame... while the game continues to grow, premier domestic competitions do not need to compete against each other. They can be used to showcase the game and support its development around the world.

Healy was also joined by Australia women’s team vice-captain Rachael Haynes who said if both WIPL and WBBL clashed it will be ‘a shame.’ “If true, it’s a shame... while the game continues to grow, premier domestic competitions do not need to compete against each other. They can be used to showcase the game and support its development around the world.”

Meanwhile, the announcement was welcomed by Indian women’s team veterans Mithali Raj and Jhulan Goswami, who only plays the one-day format. Both thanked the BCCI for the announcement and for making the WIPL a possibility amidst such grim times.

(The above story first appeared on LatestLY on Aug 02, 2020 06:23 PM IST. For more news and updates on politics, world, sports, entertainment and lifestyle, log on to our website latestly.com).